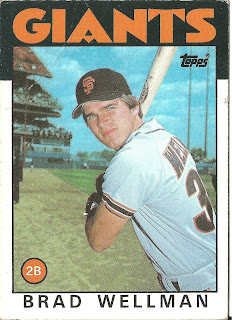 Card thoughts: If this was made into a poster, I'm sure 13 year old girls in '85 would be putting this up on their wall, right next to Michael J. Fox. This dreamy picture was shot at Shea stadium and Wellman looks unusually intense for someone waiting for a pitch that will never come.

The player: Wellman was a career utility infielder whose sister married pitcher Tom Candiotti. Drafted by the Royals, he was part of a blockbuster trade when he was traded to the Giants with Atlee Hammaker, Renie Martin, and former first round pick Craig Chamberlain for pitching great Vida Blue. His "best" season was probably 1984 when he had a career high 25 RBIs, and 10 stolen bases. He once won $1,000 on a clubhouse dare to shave his head (ooh, what a rebel!).

After his playing career ended, he managed the Astros rookie league club from 1999 to 2000, winning the league championship his first year. His son is a professional hockey player. 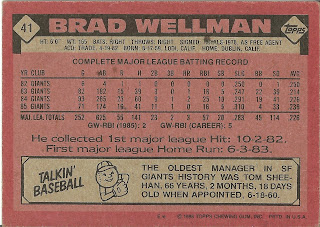 Rear guard: Wellman's home run was a two-run shot off of Bill Gullickson and drove in third baseman Tom O'Malley. These would be the only runs the Giants would score in a 9-2 loss against the Expos.

Tom Sheehan took over for Bill Rigney. It would be his only managerial job in the big leagues, and he guided to Giants to a fifth place finish with a .479 winning percentage.
Posted by Jets Break Jaws at 7:45 PM