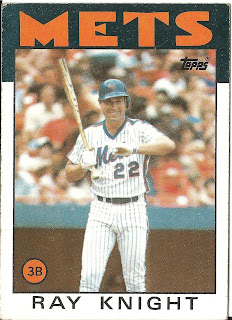 Card fact: I'm dropping the card fact. Too boring. However, I will continue updating the "stats" every 10 cards.

Card thoughts: I'm going to come right out and say it: I hated Ray Knight. In fact, I hated all the Mets in 1985. They were the biggest, cockiest jerks in baseball. Davey Johnson, their manager, was a jerk. They did a lot of cocaine. The New York Press lionized mediocrities like Knight and Mookie Wilson. They got in lots of frat boy style drunken melees. They beat the Cubs mercilessly. I think this card kind of sums up Ray Knight for me: A strange, smug smile on his face while his left hand give the "okay" symbol? What's with that? A weird, weird in action shot. Even now, when he pops up on ESPN broadcasts, I get a little angry.

The player: Knight was a good, but not great third baseman for the Reds and the Astros. His real fame came when he joined the great Mets teams in the mid-80s. Ray Knight became a hero during the 1986 World Series when he scored the winning run in Game 6 after Bill Buckner botched a play at first (I still remember forlornly watching Knight do that stupid jump--I was a Red Sox rooter in this series). Here's a video of that moment. He would end up as World Series MVP after hitting the tie-breaking home run in Game 7. In a strange twist of fate, in that same season Knight started a huge brawl in a Reds-Mets game when he sucker punched Eric Davis (coincidentally the next card in this set!). Here's the brawl.

Knight only played 2 1/2 seasons with the Mets. After the 1986 season, he would play one year each with the Orioles and the Tigers before retiring in 1988. Some speculated that the Mets irked Knight by driving a hard bargain after the 1986 season: He did not show at the anniversary celebration of their World Series victory in 2006. After his playing days, Knight was a long time coach with the Cincinatti Reds in various capacities (hitting, third base, and bench) before taking over as manager during the 1996 and 1997 seasons (replacing his former manager Davey Johnson!). He piloted the club to 81-81 record his first season, but the club was playing at a 43-56 pace the next year, when he was replaced by Jack McKeon in mid-season. He later would have another coaching go-round with the Reds in the early aughts.

Knight is currently married to former pro-golfer Nancy Lopez (the rumored split in 2009 did not happen) and broadcasts games for the Washington Nationals. 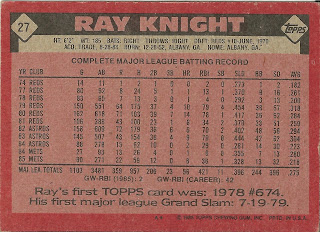 Rear guard: Here's a look at that first Topps card. Not a great looking dude. That grand slam came against the Cardinals, driving in Ken Griffey Sr., Harry Spilman, and Rick Auerbach. Knight had 6 RBIs in this game.
Posted by Jets Break Jaws at 8:56 PM

I dislike Nancy Lopez, because she's married to Ray Knight. I can't imagine a more heinous couple on Earth. I even dislike women's golf, because she plays it. Can you imagine anything worse than watching Ray Knight and Nancy Lopez wear matching polos and golf? I cannot.

Searching for the Ultimate Dating Site? Join to find your perfect date.