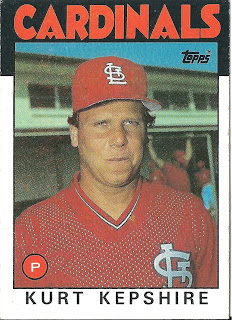 Card thoughts: Anyone remember this guy? I sure don’t but when this card was issued, Kepshire was the fifth starter on a World Series bound team. This was Kepshire’s second, and last, Topps card. The photo was obviously taken in spring training, but I'm not sure what building is in the background. Some guy is doing pull ups over there, though.

The player: Kepshire is the unusual player (at the time) who was a reliever in the minors who only became a full-time starter in AAA, right before he was called up.

Drafted by the Reds in 1979, Kepshire spent 4 years as a middle reliever before he was left off the 40-man roster in 1983. This allowed the Cardinals to draft him in the Rule 5 draft. It is unclear if he was offered back to the Reds and they declined, because Kepshire spent the entire 1983 season in the minors instead of the majors, as the rules stated. At any rate, Kepshire’s rookie season was in 1984, and it was a good one. Although he made only 16 starts, he pitched back-to-back shutouts against the Expos and Cubs and had a fine 3.38 ERA.

Kepshire went 10-9 for the pennant winning Cardinals in 1985 but with 77 walks to 67 strikeouts and a high 4.75 ERA. He was left off the post-season roster, as the Cardinals only needed 3 starters. Kepshire only pitched in 2 games in 1986, and went back the minors, out of the majors for good (he pitched until 1989 at AAA).

Moving back to his hometown of Bridgeport, Connecticut and Kepshire got a job as a prison guard. He’s set to retire this year. 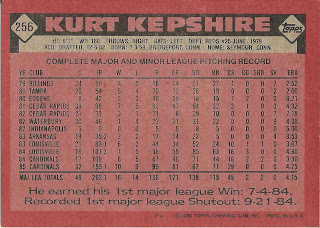 Rear guard: His first win was against the Giants when he went 8 1/3 innings and gave up only 1 run, despite pitching out of trouble all day.
Posted by Jets Break Jaws at 9:10 PM

I remember him. I thought it was because I saw him in the '85 postseason (watched every game of NLCS against Dodgers and WS against Royals). But I see he didn't get any action in either series.