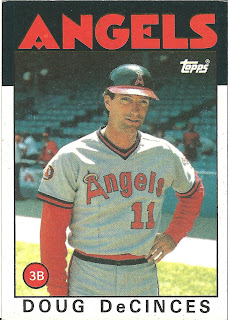 Card thoughts: I always thought DeCinces name was pronounced Dess-cin-seis, but apparently it’s dec-cin-say. Boy, do I feel like a fool.

The player: DeCinces came up with the Orioles, with the unenviable task of replacing legend Brooks Robinson as the starter at third base. Although he displayed good range at third, he was error prone and generally was in the top 10 in errors at his position. DeCinces made up for it with his bat. As a starter, he reached double digits in home runs every season.

After hitting below .250 in 1976, steady improvement gave DeCinces his first good season in 1978 when he hit 28 home runs, drove in at 80, and hit .286. Injuries the following season dropped his home run total to 16, but one those home runs, the dramatic 2 out 2 run home run against the Tigers produced this dramatic radio call and was credited with propelling the “Miracle Orioles” to the pennant. He contributed in the ALCS with a .308 average, and hit a homer and drove in 3 in their World Series loss.

The Orioles had a young third baseman named Cal Ripken they wanted to bring up, so DeCinces was deemed expendable after the 1981 season. But the Orioles made a lousy trade with the Angels, getting Dan Ford, who had a great season in 1979 and done nothing since, for the steady third baseman.

DeCinces immediately played dividends for the Angels, hitting a career high 30 home runs, driving in 97, and hitting over .300. Although he didn’t make the all star team that year, it is likely that performance weighed on the mind of the following year’s AL manager, Harvey Kuenn, who named him as a reserve the team the next year, when he seemed well on the way to replicating the ’82 season by hitting 15 home runs and batting .313 in the first half. Injuries limited him to 34 games in the second half, hitting .222.

DeCinces rebounded with three straight solid power-hitting seasons, culminating in a 26 home run, 96 RBI campaign in 1986 that helped the Angels reach the playoffs for the first time since 1982. The aging Angels were no match for the Red Sox in the ALCS, but DeCinces did his part, hitting a home run and driving in 3.

As DeCinces was now north of 35 years old, in those pre steroid days a swift decline was inevitable. After hitting 16 home runs in 1987 for the Angels, he was released with only a few days left in the season. He managed to latch on to the Cardinals, where he played the final 4 games of his career, hitting .222.

After a stint in Japan, DeCinces became a real estate developer in Orange County, CA. One of his projects was the Strawberry Farms golf course. Unfortunately, greed got the best of DeCinces, and he was convicted of using inside information to net over $1 million on a stock sale of Abbott Labs. He was forced to pay a $2.5 million fine in a settlement with the SEC. 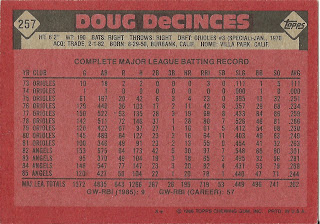 Rear guard: Those stats scream out "Consistent" but not "Awesome."
Posted by Jets Break Jaws at 10:37 PM