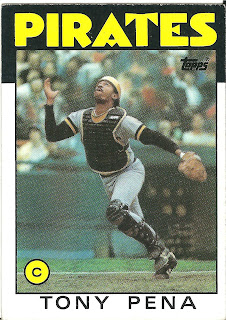 Card thoughts: Alright! Back to the exciting catcher action shots. Here, Pena goes after a pop up right in front of home plate. Apparently, Topps thought Pena was the real deal, as he lands the coveted card number ending in a zero.

The player: Pena was generally acknowledged to be the premier defensive catcher of his day. Nobody was better at blocking pitches in the dirt. His most distinctive feature was when he would extend his left leg outwards while in a crouch in order to give the pitcher a better low target.

Pena was converted to catcher after playing a variety of positions in rookie ball. By the time he got to AAA in the late 70s, Pena was raking the ball, hitting 34 homers and driving in 97 one year. In the strike shortened season of 1981, Pena would come in 6th in the rookie of the year balloting by hitting .300 and coming in third in percentage caught stealing.

Despite his accomplishments, many of his Pirate teammates felt Pena was a selfish player. As the “face of the franchise” when the team was pretty terrible, it was probably inevitable that there could be some sour grapes in the clubhouse. Apparently, when Pena was traded before the 1987 season to the Cardinals for Andy Van Slyke, Mike Dunne, and Mike LaValliere, many players refused to shake his hand when he left, and openly stated it was one of the best trades the Pirates had ever made— which turned out to be correct. Perhaps some of the animosity stemmed from Pena demanding a trade the previous year, saying he didn’t want to play for a loser.

Whatever the reason for the trade, 1987 a broken thumb caused by being hit by pitcher Brian Fisher prevented Pena failed from catching at least 130 games for the first time in five seasons. He had a terrible year even when healthy, hitting only .211 with 44 RBIs. He made up for this in the post season, hitting .381 in the NLCS and over .400 in the World Series. 1988 was a bounce back year for Pena, as he hit 10 home runs and drove in 51, similar to the numbers he put up in his prime. Despite driving in a career (full season) low 37 runs in the following year, Pena appeared in his last all star game where in his 2 at bats he didn’t get a hit and ground into a double play.

He left the Cardinals as a free agent and signed with the Red Sox, where he had three straight seasons of catching over 130 games, despite being in his mid-30s. Pena was still effective defensively, winning his last gold glove in 1991 by leading the league in caught stealing, putouts, and range factor at catcher. He was still effective at the plate as well, although his power had declined significantly, as still hit fior a decent average and drove in a fair amount of runs.

Pena's brother Ramon had a cup of coffee in the majors and his son, also named Tony Pena, was once a starting shortstop for the Royals. Inability to hit after the 2007 season convinced him to switch to pitching.

In 2002, Pena pere became the manager of the Royals, winning the Manager of the Year award the following season as he led the team to a surprising 83-79 record. After 100+ loss season in 2004, and an 8-25 start in 2005, Pena quit as manager. He was snapped up almost immediately by the Yankees, where he had coached for the last 6 seasons. Pena is currently under serious consideration for the vacant Red Sox managerial post. 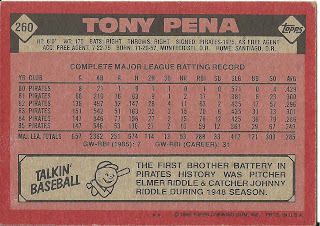