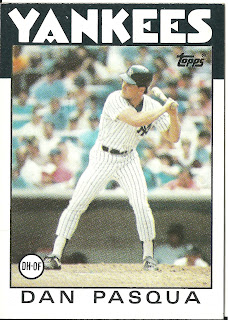 Card thoughts:  One thing you notice if you are lucky enough to get a box seat at baseball game is what the player’s stance looks like from the side, something that is not usually seen with the camera angle used on TV. If the goal of a baseball card is to give a collector a more intimate look at a player, mission accomplished with this card, which is Pasqua’s first for Topps. His rookie card was issued by Donruss the previous year.

The player: The Yankees were enamored with this type of the player in the 80s: The DH-1B lefty who could reach the short left field fence at Yankees stadium. These players generally hit about 20 homers, but rarely hit for high average or drove many in (#34 Ken Phelps and Kevin Maas are players similar to Pasqua that came after him).

After his rookie year, Pasqua spent a year as the regular leftfielder, hitting .293 with 17 home runs, and another as a reserve outfielder and designated hitter, putting up identical home run numbers, but only 8 other extra base hits out of 74 hits.

Pasqua regained his starting leftfielder position after he was traded to the White Sox after the 1987 season with Mark Salas and Steve Rosenberg for pitchers Richard Dotson and Scott Nielsen. Although he hit a career high 20 home runs, and played a reliable left field, his home runs only produced 50 RBIs and he hit only .227. Pasqua was limited to 74 games after he broke his wrist early in the 1989 season. He bounced back in 1990 as the primary designated hitter for the Sox, slugging .493, with almost half of his 89 hits going for extra bases.

With incumbent first baseman Carlos Martinez testing the free agent market, Pasqua became the starting first baseman in 1991 and responded by setting career highs in runs scored (71) and runs batted in (66). But this would be his last effective season as Pasqua was moved to right field the next year but hit only .211 with little of his customary power. On the bench in 1993, Pasqua’s poor .205 average signaled the end was near. His .217 average in 1994 in 11 games pushed him out of major league baseball for good. Pasqua’s career rate of 1 home run for every 22.39 at bats is better than hall of fame sluggers Dave Winfield and Andre Dawson.

Pasqua, unlike many former players, looked to distance himself from the game after retirement, and he started LDP, a single-family home construction company that built lots of homes in the Kankakee, Illinois area. The housing market bust claimed LDP as a casualty, and he began work as a community representative for the White Sox. 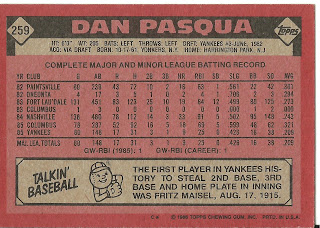 Rear guard: Pasqua won the MVP in the International League the season represented by this card, despite only playing 78 games.

Fritz Maisel had led the league in steals the season previous to this feat with 74. He was nicknamed "Flash" for his speed, which must have been prodigious since this was the dead ball era and everyone was stealing bases.
Posted by Jets Break Jaws at 9:00 PM

You missed posting on his birthday by one day!