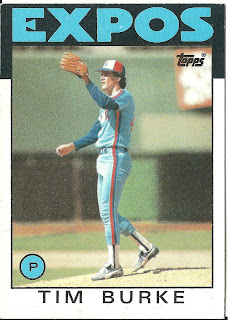 Card thoughts: Tim Burke has a body that looks as flat and thin as a board, except for a mysterious profusion off of his right thigh.

The player: Burke was an All American at the University of Nebraska before being drafted by the Pirates in the 2nd round in the 1980 draft. He had mediocre minor league career as a starter, and was traded two years with a bunch of other minor leaguers to the Yankees for Lee Mazzilli.

The Yankees, as they were wont to do in those days, had no insight into the development of young players, and gave up on Burke quite quickly, trading him a year later for a 26 year old who couldn’t get out of AAA. Still a starter, Burke won 11 games at Indianapolis, the Expos AAA club.

In a quite incredible development, Burke, despite rarely relieving the minors, set a rookie record for games pitched in the year represented by this card. He led the league with 76 while setting up ace closer #35 Jeff Reardon. If Vince Coleman had not also set a rookie record in steals that year, Burke would have been a strong Rookie of the Year candidate.

After another stellar year as a setup man, Burke became the Expos closer after the trade of Reardon before the 1987 season. He responded with 18 saves and a miniscule 1.19 ERA. Burke contributed 18, 28, and 20 saves the next 3 seasons. The secret to Burke’s success was his control. He generally only walked 1 batter every 4 or 5 innings, at least 1/3 of them were intentional.

Burke was traded to the Mets for pitchers #225 Ron Darling and Mike Thomas (who pitched just one major league game) midway through the 1991 season. He had a 2.75 ERA the rest of the way, but the next season saw Burke’s ERA climb to 5.74 before the Yankees, perhaps trying to atone for their previous folly, acquired him mid-season. Despite a 3.25 ERA the rest of the way, Burke retired at age 33 to spend more time with his adopted children from Vietnam, Korea, and Guatemala.

A born-again Christian, Burke appeared in a Christian rock video by Geoff Moore and the Distance called “Home Run.” (I think he may be the pitcher in the video? I don’t know! But it is heavily symbolic.) 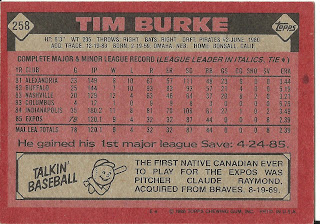 Rear guard: Burke's first save came in a bit of a slugfest, with the Expos edging the Phillies 7 to 6. Reliever Dan Schatzader had given up 3 runs in the ninth, before Burke got Tim Corcoran to ground out to end the game.

Claude Raymond was a veteran reliever near the end of his career when the Expos acquired him, prompting the issuance of this card (he's wearing Braves pinstripes). He comes from St. Jean, Quebec (now known as Saint-Jean-de-l'Île-d'Orléans, a town on Orleans Island in the St Lawrence River.
Posted by Jets Break Jaws at 8:58 PM