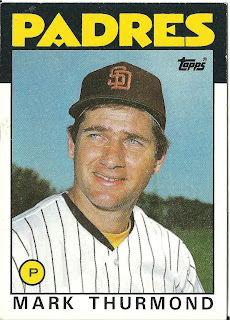 Card thoughts: Looking at this card brings up an emotion of faint loathing. It could be the smirk on this guy's face. It could be the fact that I hated all Padres not named Tony Gwynn after they beat the Cubs in 1984. Anyway, pretty boring head shot of Thurmond, looking like he's hanging out in a clearing out in the woods.

The player: Thurmond had a long apprenticeship in the minors for someone with his talent (he won over 10 games for the Padres AA club Amarillo twice, and also repeated AAA after winning 12 games in Hawaii in 1982). This may have been because Thurmond was your prototypical soft-tossing lefty and he was not a strikeout pitcher. He only averaged 3.4 strikeouts per nine innings in his career. However, he walked few batters as well, only 2.8 per 9. Thurmond had a career year in 1984 going 14-8 with a stellar 2.97 ERA to help the Padres reach the World Series. He was horrendous in both the playoffs and World Series, losing 3 games and having an ERA over 9.

This card would be the last showing Thurmond as a Padre. After a horrible start to the 1986 season (6.50 ERA in 15 starts), he was done as a Padre and as a regular starter. He was traded mid-season to the Tigers for Dave LaPoint and pitched really well out of the bullpen for Detroit with a 1.92 ERA. The next year he wasn't as effective, and only got into 1/3 of an inning in the ALCS. He was traded in 1988 to the Orioles for Ray Knight, who was discussed earlier on this blog. He finished his career with the Giants in 1990.

He currently works as the VP of the insurance agency started by his father. If you live in the Houston area, give 'em call! 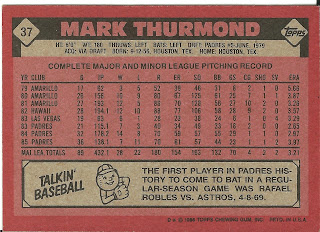 Rear guard: Rafael Robles came from the Dominican shortstop factory of San Pedro de Macoris. The poor guy only hit .100 that year and was only in the lineup for 6 games. In the first Padre game ever, he led off and reached on an error by second baseman and former ESPN blowhard Joe Morgan. He later stole second. And that was the highlight of his year.
Posted by Jets Break Jaws at 8:09 PM