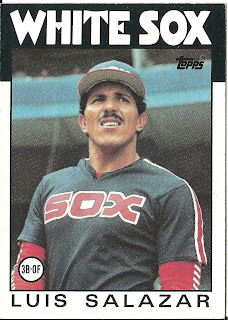 Card thoughts: Another picture at Tiger Stadium. This looks like one of those old cards where the player gets traded, and he's looking up so you can't see the old team logo on his hat. Also, the position should technically be OF-3B, as he played more in the outfield this season.

The player: Salazar was discarded by the Royals and Pirates organizations in a 7 year minor league career before he made it to the majors with the Padres in 1982. Once there, Salazar was the Padres starting third baseman for a couple of years, before settling into a utility role, with occasional seasons where he started due to injury or lack of other options. After arriving in 1984 with the White Sox along with Ozzie Guillen in the Lamarr Hoyt trade, he played for the Padres two more non-consecutive times, in between stints with the Cubs and the Tigers. He provided a spark to both of these teams upon his initial arrival. His best year was his first with the Tigers in 1988 when he hit 12 home runs and had 62 RBIs while playing every position except catcher and pitcher. He especially sparked the Cubs the next year, when he hit .325 down the stretch as he replaced the slumping Vance Law as the Cubs starting third baseman. Salazar continued his hot-hitting in the playoffs, which I well remember, hitting .368 in the championship series. He started the next couple of years for the Cubs at their perennial black hole position before retiring in 1992.

Salazar was recently in the news because of a horrific accident this year during spring training. A manager in the Braves minor league system, he was sitting in the dugout when a line drive off the bat of Braves catcher Brian McCann hit him in the eye. He lost the eye because of the injury, but returned to managing later that year. Here's the full story. 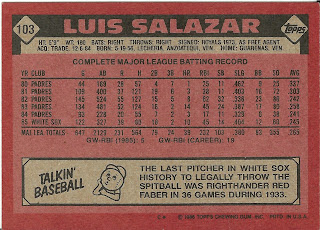 Rear guard: The spitball was outlawed because it was hard to see in low-light games at dusk (a spitball usually was darker, as the tobacco juice spit was mixed with mud). A spitball thrown in such conditions even killed Ray Chapman. But 18 spitballers were allowed to keep throwing the pitch until they retired. Red Faber was the second to the last to throw it.
Posted by Jets Break Jaws at 10:34 PM

Sparky Anderson loved Salazar when he was with the Tigers. I liked him too, but unfortunately his playing time was more an indication of the poor talent on the rest of the team. I love those shots from Tiger Stadium and I think the photographers liked it because of the dark background.
Brandon
http://1983toppsblog.blogspot.com/