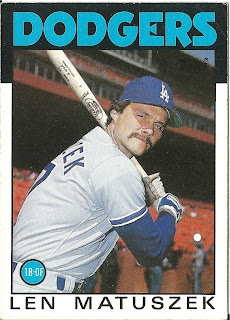 Card thoughts: This picture looks like it was taken at Candlestick Park, although I swear I saw this guy eating a huge plate of pierogis at the old Orbit Restaurant on Milwaukee (sans bat of course, with a tankard of Okocim).

The player: Matuszek didn't get much playing time in the majors, despite showing a lot of power in his limited at bats. In the first three years of his career, he never made it into more than 30 games. That changed in 1984 when the Phillies traded Pete Rose to the Reds. They made Matuszek their starting first baseman, and he responded with 17 doubles, 12 home runs and 46 RBIs, despite only having 65 hits. He had good range at first, too. The Phillies were not impressed with his .248 average, however, and the Blue Jays acquired him to be their left-handed designated hitter in exchange for three minor leaguers. The Blue Jays soured on him as well by midseason and he was traded to the Dodgers (who needed some pop on their bench), for veteran Al Oliver. He played one more full season with the Dodgers, hitting .261 in 91 games and then retired after 16 games in 1987. 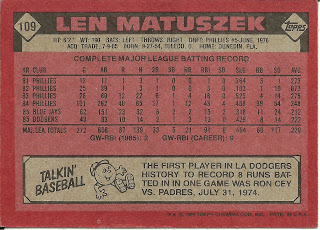 Rear guard: "The Penguin" was a favorite player of my friend Korry when he was growing up. The Dodgers had just a killer offense in the 70s, especially considering the division they played in. Cey had two two-run homers that day and the Dodgers scored 15 total runs. The primary victims were starter Dave Freiselben (5 runs given up) and reliever Vincente Romo (who gave up 6 runs in one inning).
Posted by Jets Break Jaws at 8:38 PM