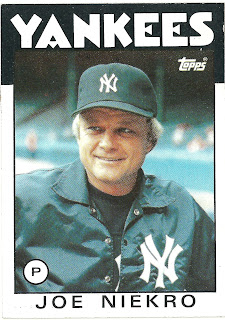 Card thoughts: Topps really had to scramble for this shot at Tigers Stadium. Niekro was picked up in mid-September from the Astros and only started 3 games for the Yankees. Luckily for Topps, one of those games was at Tiger Stadium on September 19. He lost that game to Frank Tanana (his brother Phil lost the day before).

The player: Niekro broke in with the Cubs in the late 60s, and was one of a bevy of promising young pitchers they had in that time period. He won 10 games his rookie year and 14 the next. But the Cubs had an overflow of starting pitching talent at that time, so he was traded to the expansion Padres in 1969 for reliever Dick Selma. Niekro was terrible with the Padres, losing 17 games and he didn't win more than 6 games from 1970-1976 as he bounced from team to team and back and forth from the majors to the minors. It was in one of these minor league stints that he began to throw the knuckleball that his dad had taught him (and his hall-of-fame brother Phil). Due to the fact that Niekro was previously a power pitcher, he always threw a hard knuckler and could set the pitch up with the fastball or slider.

The pitch changed Niekro's career trajectory and with the Astros in the late 70s he became a big winner. At age 34, he had his first 20 win season, leading the league win 21 wins and 5 shutouts, and making his only all-star game appearance. He won over 20 the next season, 1980, also. He was Houston's top pitcher until the season shown on this card (he was almost 40 years old). He would pitch until 1989 with the Yankees and Twins. Those of my generation will best remember Joe pitching in the 1987 playoffs, and throwing an emery board "accidentally" to the ground when an umpire came to check him for scuffing the ball. Every one had a good laugh at his ridiculous attempt at evasion.

Niekro died of a brain aneurysm in 2006. His daughter has established a foundation to research brain aneurysms. The cool thing is their annual gala is called the Knuckle Ball. 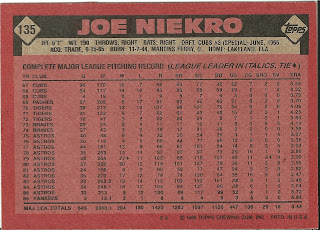 Rear guard: Wow, it is really hard to see that miniscule 3 games Niekro pitched with the Yankees. I wonder if they printed up a Astros card.
Posted by Jets Break Jaws at 9:15 PM

Joe's son, Lance, was the heir apparent to J.T. Snow at first base for the Giants. He spent most of '06 as their first sacker but didn't hit enough. He went on to the Houston organization and tried to make it as a knuckleball pitcher.