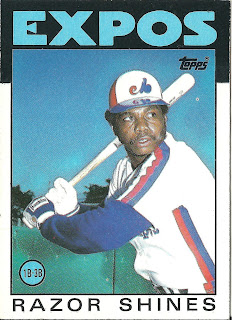 Card thoughts: I was so excited to get this card. Why? Because this player has the baddest name ever. And he's glowing in the picture! The first of the glowing Expos. This is Shines only regular season Topps card. And he didn't play one game at third in the majors that year.

The player: Despite the awesome name, Shines career was anything but. Drafted in 1978, his career stalled out in AAA in 1983. As a catcher, he was blocked by Gary Carter, so he learned to play first. After brief tastes of the majors in 1983 (3 games) and 1984 (12 games), Shines was handed the opening day first base starter role in the season shown on this card. But Shines hit only .120 in 54 at bats, causing the Expos to look to another youngster to fill the role, the "Big Cat" Andres Galarraga. Although he hit poorly as well, he had a lot more promise than Shines. He went back down the Indianapolis Indians where he played for the next 7 seasons, (with a brief exile to Buffalo in 1990), becoming a local cult hero. They even had a "Razor Shines Day" when he was back in town as the manager of the White Sox AAA club.

After his playing days were over, like the baseball lifer he is, Shines began managing and coaching in the minors. He coached in majors with both the White Sox (2007) and the Mets (2009-2010). 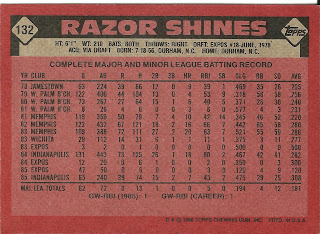 Rear guard: Shines major league career had so little promise, Topps didn't bother with the career firsts on this one. You can see at this point that Shines has a penchant for repeating levels in the minors (already 5 seasons at AAA), not a good sign for a prospect.
Posted by Jets Break Jaws at 8:23 PM