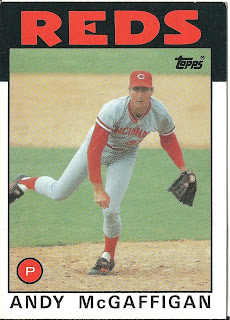 Card thoughts: There's something about this card that makes me slightly seasick. Perhaps it's the puke green "grass" behind McGaffigan. Or the awkward follow through that looks like he's in heavy seas, about to fall over.

The player: With McGaffigan, it took a long time to consistently stick in the majors. Despite being in only his fifth year in the majors by the time this shot was taken, he had played with 4 teams. McGaffigan featured a slider, changeup, and two kinds of fastballs, one that ran in, and one that sunk. He first got a good look after the team that drafted him, the Yankees, traded him to the Giants for pitcher Doyle Alexander. He got into 43 games that year (16 starts), but wasn't too impressive. After a couple more trades, McGaffigan ended up with the Reds, who tried to make him a starter to limited effect. He finally became a good pitcher the second time he played in Montreal. He consistently had his ERA under 3, as the Expos wisely had him pitch mostly in relief. McGaffigan's best season was in 1986, when he went 10-5 and pitched a career high 142 1/3 innings. He pitched well in Montreal until 1989, before going back to the Giants for a second time. He finished his career with the Royals in 1991. Despite being unwanted by a lot of teams, McGaffigan ended up with a stellar 3.38 ERA over 11 seasons. He also was one of the worst hitting pitchers of his day, sporting a career .048 batting average. There's a great interview here, where McGaffigan somewhat surprisingly states that he liked playing in the Midwest the best in his career.

After retiring, McGaffigan put on golf tournaments for a few years before becoming a financial adviser. 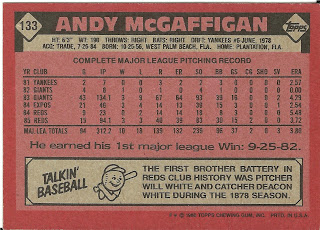 Rear guard: McGaffigan got the win by pitching to one Dodger batter in the 7th inning, Pedro Guerrero, who grounded out to first.

I really don't get Topps obsession with catching/pitching brother duos in their "Talkin Baseball" feature. In 1878, Will White started (and completed) 52 games, winning 30 and losing 21. He won over 40 games three times in his 10-year career (pitchers' arms fell off at age 30 in the 19th century).

I don't understand why Deacon White isn't in the hall of fame. He was the best catcher of his day, a day when catchers caught barehanded and had no protection. White still managed to play 20 years (although he did switch to the outfield and third base when in his 30s) and collect over 2,000 hits. When he retired, only Cap Anson had more RBIs. He also played for one of the first ever professional clubs, the Cleveland Forest Citys in 1868. White hit .314 in 1878 while catching his brother, but hit his were not very productive as he only drove in 29.
Posted by Jets Break Jaws at 8:53 PM