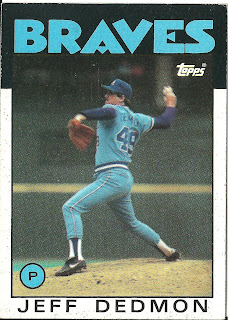 
The player: The hardest player to write about is the middle reliever. Their careers are generally short, and there aren't many distinguishing features. Highly sought after as an amateur (he was drafted in the first round by three different teams), Dedmon played 6 years in the majors, all but one for the Braves. He threw hard, and also featured a knuckle curve. However, Dedmon tended to be wild, which limited his effectiveness. His best season was in 1986 when he went 6-6, pitched a career high 99 2/3 innings, and had a 2.98 ERA. After being traded to the Indians in 1987, Dedmon retired the next season. 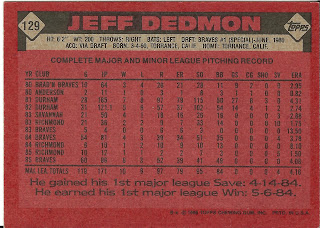 Rear guard: Dedmon really earned that first save, logging 3 2/3 innings of shutout baseball in relief of Rick Camp. He walked one and struck out one Padre.
Posted by Jets Break Jaws at 12:00 AM