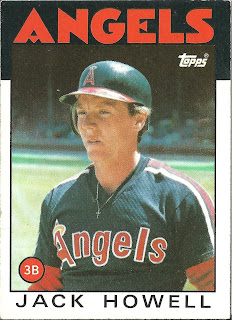 Card thoughts: Howell looks like a lost gnome. Hey Jack. Like most other American Leaguers, you're in Tiger Stadium. This is his rookie card.


The player: Howell could do one thing well: hit home runs. He couldn't field at third, he struck out way too much to be a good RBI man, and he had no speed. But the hits he got were generally for extra bases. After two years backing up veteran Doug DeCinces, Howell became the Angels super sub in 1987 and then the Angels regular third baseman the next year. Through 1990, Howell played regularly. His best year was in 1988, when he had a career high 127 hits and 32 doubles, to go with 16 home runs and 63 RBIs. Howell's average kept on declining after that year, dropping to .228 and .210. After a trade to the Padres, he followed the man he supplanted at third, Doug DeCinces, to Japan. Howell's brand of power was a success with the Yakult Swallows. In 1991, he became the first foreigner to win the MVP award, having hit 38 home runs in only 113 games. Three more productive seasons followed.

Howell played in Japan until 1995 until he returned the United States, fully intending to retire. Instead, he signed back with his old club, the Angels. He must have learned something in Japan, as he began routinely slugging better than .500 in a platoon role. Howell signed after the 1997 season with the Astros, but injuries prevented him from playing more than a handful of games his last two seasons. He is currently the minor league field coordinator with the Seattle Mariners. 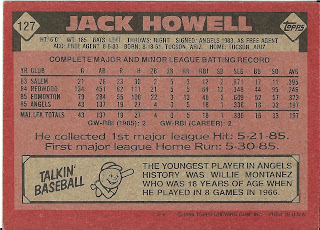 Rear guard: Howell's home run provided the only run the Angels would get off the Yankees that day. It came off Joe Cowley.

Willie Montanez may have played in the majors at 18, but he didn't make it back until he was 22 in 1970. Here's his rookie card. He did end up playing a productive 14 seasons for 9 different teams. He was known as a good clutch hitter.
Posted by Jets Break Jaws at 8:47 PM