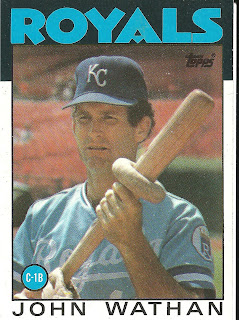 Card thoughts: My least favorite posed shots on Topps cards is the bat held unnaturally. It makes the player look threatening. I think Wathan's about to cream the photographer. This was his last Topps card as a player.

The player: Wathan was an opposite field singles hitter with tremendous speed. His profile is that of a middle infielder, but somehow he became the Royals regular catcher in 1982 and 1983 after Darrell Porter left. Wathan was a first round draft pick of the Royals in 1971 and he never played for another organization. With Porter catching nearly everyday, when Wathan came up in 1976, he ended up playing a lot of first base and outfield. The Royals liked his bat: He hit over .300 in part time roles in 1977, 1978, and 1980. In between those years, he had a horrible season in 1979 when he barely batted above .200. But he was dealing with his mother's murder at the hands of his deranged half-brother. Wathan's big break came in 1982 when he played in a career high 120 games at catcher. He hit .270 and set a record with the most steals by a catcher with 36. This record stands to this day. Wathan stole another 28 bases the following year, but his average dropped to .245.  He lost his starting job first to rookie Don Slaught and then veteran Jim Sundberg.

Wathan immediately became a Royals coach upon retirement in 1985. He coached for a year and then became manager of the Royals in the second half of 1987. He managed the Royals until 1991, but was not popular with teammates. They resented Wathan's high handed ways and no doubt there was a bit of friction because Wathan had been their teammate only a few years previous. He did manage the Royals to a .515 winning percentage. He would later manage the Angels in the middle of the 1992 season while regular manager Buck Rogers recovered from an accident. He currently works for the Royals organization. 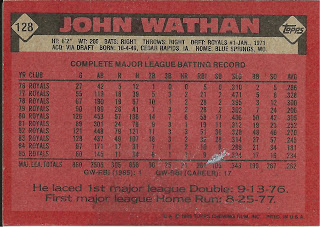 Rear guard: Oh the dreaded gum stain! And there's even a piece of the pack still attached! I don't think I've seen Topps highlight a player's first double before, but since Wathan didn't get a lot of extra base hits, I guess it's important. His first double was off teammate George Brett's brother Ken, who pitched for the White Sox. It drove in Frank White.
Posted by Jets Break Jaws at 10:05 PM