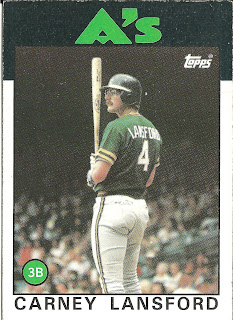 Card thoughts: A perfectly symmetrical photo of Lansford on deck. Looks like a submission in a photography class.

The player: Lansford could always hit. There was no single way to pitch him, and he could drive almost any pitch he got. At third, he made up for poor range by being quick. The one thing that held Lansford back was injuries. When healthy, he played nearly every day. But for several years he struggled to appear in over 120 games.

Lansford was immediately recognized as a future star when he broke in with the Angels in 1978. He finished third in the rookie of the year voting on the strength of a .294 average. He was even better the next year, scoring 114 runs (5th in the league) while hitting 19 home runs and driving in 79. Despite another solid season for the Halos in 1980, they shipped him to Boston the next year for Rick Burleson and Butch Hobson. The cozier confines of Fenway helped him hit over .300 the first time, leading the league with a .336 average . . . although the season was shortened by the strike. He would go on to hit over .300 the next three years. Despite being a valuable young hitter, he was traded again, this time to the A's for Tony Armas. He would remain with the A's for the rest of his career, which ended in 1992. With the A's. Lansford made the all-star team for the first time in 1988. He also played in three straight World Series, hitting .438 on the 1989 team. Lansford's career average was .290, and he had over 2,000 hits, but it was his fate was to be the complementary, not the super, star on the teams he played on.

After his career was over, Lansford coached for his former manager Tony LaRussa with the A's and Cardinals, as well as the Giants and Blue Jays. He's currently the hitting coach for the Colorado Rockies. He also appeared in a cameo in the movie Angels in the Outfield. He appears at the 4:45 mark as Kenny "Hit or Die" Kesey, who looks pretty mean with his fake scar. 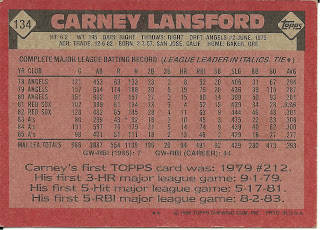 Rear guard: Here's Lansford's first Topps card. You can see by the highlights, Lansford could really explode in a game and become a one man wrecking crew. Of his 5 hits, 4 were singles off of Dennis Leonard who gave up 15 hits that day; his final hit off of #50 Dan Quisenberry drove in Jim Rice. Despite getting 17 hits that day, the Red Sox managed to lose to the Royals, 5-4.
Posted by Jets Break Jaws at 9:52 PM

Carney wrecked his leg in a snowmobile accident in the 1990-91 offseason, cost him nearly the whole year. Walt Weiss also had a busted up leg that year, Mark McGwire barely hit .200 and Dave Stewart's four-year streak of 20 wins came to a crashing halt—as did Oakland's three-year playoff streak. It's almost funny now but people forget Dave Henderson was a serious MVP candidate in the first half that year.