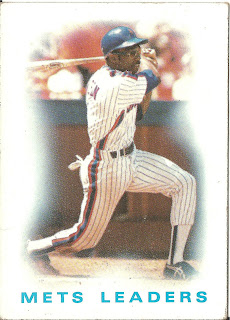 Card thoughts: In the old NL East, the team I hated most was not the Cardinals--it was the Mets. A team full of cocky jerks who were also a very good team. That hatred has dissipated with the new divisional format, and the fact that the Mets are no longer cocky, just a little pathetic. The Mets in the 1985 season showed a precursor to the dominance they would show in 1986. Most of the same players were in place, and they came in 2nd to the Cardinals, winning 98 games.

The player: Wilson was one of the few non-jerk Mets in this era, perhaps because he was one of the few Mets who remained from the lean years in the early 80s. Wilson's debut was September 2, 1980s, not September 1 like the back says. He went 0-4 as the leadoff hitter, but he drove in a run with a fielder's choice. Interestingly, it was Wally Backman. If Backman had been hitting farther up in the order, he would have been the dean of the Mets. Instead, Wilson beat him by about 10 minutes. 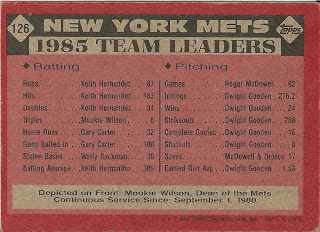 Rear guard: Wilson led the the team in triples despite playing in only 93 games. Carter led in the power categories, because Strawberry played only 111 games, battling hangovers, illness, injury, and general malaise. Gooden, of course, dominated the pitching stats--Gooden's 1985 season is considered one of the best all-time. His wins, complete games, innings pitched, strikeout, and ERA stats led the league. Orosco and McDowell provided a fine lefty-righty closing combo, in the days of dual closers.
Posted by Jets Break Jaws at 12:16 PM