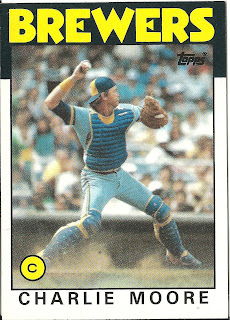 Card thoughts: Another exciting catcher shot. Too bad they couldn't have had more exciting action shots of other positions. I'm guessing that the Topps photographers were stationed in the dugout for the batting shots, which made it easy to get these also.

The player: Moore had an interesting career. He started out in 1973 with the Brewers as a backup catcher/outfielder. He didn't really hit that well in this role, but he was given the starting catching job anyway from 1977-1980. His hitting improved every year, and he hit .300 in 1979 and .291 in 1980. His fielding was inconsistent, however. He led the league in passed balls in 1977, but he did average about 35% caught stealing in those years. In 1980 he even hit for the cycle.

However, Moore's future playing time at catcher was limited once the Brewers acquired Ted Simmons in 1981. The team liked his bat enough to move him to right field full time in 1982. He sported a strong arm in his new position and hit decently enough for the position, but not as well as he did as a catcher. Moore also tore the cover off the ball in the division and world series that year, hitting .462 and .346, respectively. But his best season as an outfielder might have come in 1983 when he had a career high 150 hits and 49 runs batted in while hitting .284. But Moore was once again relegated to a backup role when the Brewers wanted to try a young #76 Dion James in the position. He would again switch positions, this time back to an everyday catcher for the 1985 season, an unusual switch for a player over 30 years old. He ended up playing 14 seasons with the Brewers and ended his career in 1987 with the Blue Jays. He currently works as a sales representative in his hometown of Birmingham, Alabama. 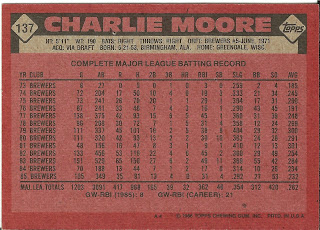 Rear guard: Moore's .232 average in 1985 was his lowest since 1978. Playing the outfield certainly strengthened Moore's arm for his move back to catcher: He was 4th in both assists and caught stealing, despite only catching 102 games.
Posted by Jets Break Jaws at 4:56 PM