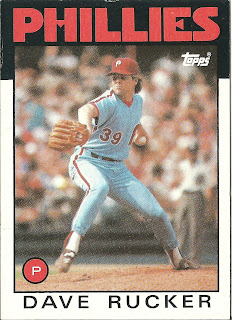 Card thoughts: Nice PJ's Rucker! Seriously, this is a great illustration Rucker's pitching motion, as the photo has caught him in the middle of throwing a fastball to the plate. Perhaps in his dreams.

The player: Rucker was a career middle reliever who took his time getting to the majors. He was stuck at AAA Evansville for all or part of five seasons before being called up to the Tigers. He was traded to the Cardinals for Pitcher Doug Bair where he had his best seasons, with ERAs under 3 in 1983 and 1984. However, his control was bad, as he walked almost as many as he struck out. This should have been a warning sign for the Phillies. Instead, they traded Bill Campbell and Ivan DeJesus to get him. He was pretty bad for the Phillies and he was let go in 1987 to sign a minor league contract with the Rangers. He didn't make it to the majors again until 1988 and after 31 games that season with the Pirates his career was over. 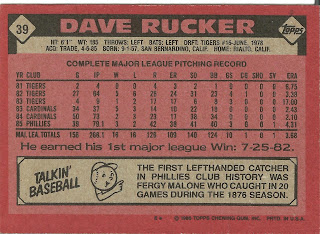 Rear guard: Rucker's first win was in the second half of a doubleheader against the Rangers. He got the win because Tigers reliever Dave Gumpert blew the lead in the 7th. He pitched the ninth and typically walked one and struck out none.

Fergy Malone actually played with the Philadelphia in the first season of the National Association, the proto-pro league that predated the National League. He was 31 as a "rookie" catcher in 1876 when the Phillies were called the Athletics. He hit .220 and had an incredible 31 errors and 25 passed balls in 20 games. But they didn't wear gloves in those days, so perhaps that isn't surprising.
Posted by Jets Break Jaws at 4:31 PM