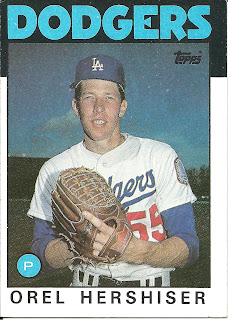 Card thoughts: Hershiser looks like the "boy next door" from one of those 60s sitcoms like My Three Sons. No doubt he's squinting because of the flash needed to illuminate this night shot.

The player: Nicknamed "Bulldog" by manager Tommy Lasorda in order to toughen him up, Hershiser is of course best known for breaking Don Drysdale's consecutive scoreless innings streak. But people have forgotten (including me) how consistently good Hershiser was before he injured his rotator cuff. As a pitcher he had a decent enough fastball, but the sinker was his out pitch, and he featured a good curve and slider as well. Another strength was his control: He rarely averaged more than 3 walks every nine innings.  He was also an excellent fielder and hitter (Hershiser once hit over .340 in a season).

A mediocre reliever in the minors, something seemed to click once Hershiser reached the majors. After coming in third in the Rookie of the Year award in 1984 on the strength of a league leading 4 shutouts and an 11-4 record, Hershiser dominated the year shown on this card. He went 19-3, easily leading the league with an .864 winning percentage. His ERA was a miniscule 2.03. The next couple of years he was a .500 pitcher (although he won 14 and 16 those years), mostly because his ERA rose by a run. In 1988, however, Hershiser had one of the greatest seasons all time by a pitcher. In addition to closing out the regular season with a record 59 scoreless innings, he led the league with 23 wins, 15 complete games, 8 shutouts, and 267 innings pitched. His ERA was once again barely above 2. Hershiser was the unanimous choice for the Cy Young Award. If anything, he topped himself in the playoffs that year, winning both the NLCS and World Series MVP. He had ERAs of 1.09 and 1.00 respectively, and even got a save against the Mets.

The next year, despite an ERA of 2.35, Hershiser once again had a .500 record, and even led the league in losses as the Dodgers didn't provide him much run support. But the next season was even worse, as he tore his rotator cuff early in the 1990 season. Some thought his career was over, but he battled back. But Hershiser would never again be a big winner for the Dodgers. His ERA rose by more than a run after the injury and he led the league in losses again in 1992.

But Hershiser was an intelligent pitcher and eventually learned to work within his limitations. After signing with the powerful Indians, who were in the midst of dominating the American League Central, he got his mojo back and won 16 games for the Tribe in 1995, despite having an ERA of 3.67. He would once again have a high winning percentage for the next three seasons, helped by the most powerful offense that had ever supported him. But after 1995, he was brutal in the playoffs, racking up high ERAs and losing big games, including 2 in the 1997 World Series.

Hershiser had brief stints with the Giants and Mets before ending his career with the Dodgers at age 41. He had a fine 204-150 career record, and would surely be in the hall of fame if some of those Dodger teams would have hit better. After his playing days were over, Hershiser was the pitching coach for the Rangers and worked for a time in the front office. He's currently the color analyst on ESPNs Sunday Night Baseball and also plays professional poker under the name "Bulldog." 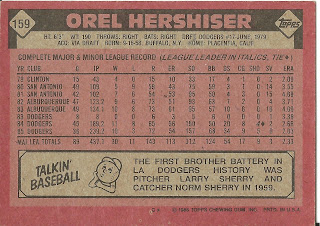 Rear guard: This brother battery bit is getting a bit tired, Topps. In 1959, Sherry was a rookie who only had 3 at bats and one hit. But he is better known as the catcher who tamed Koufax into become a big winner. Sherry never was anything more than a backup catcher, and he hit only .215 in his career.  After his playing days were over, he had a long coaching and managerial career. I can recall him with the Giants in the mid 80s. His brother Larry was a much more successful pitcher, mostly as a reliever. He finished with a 53-46 record over 11 seasons. In 1959, Sherry had a sensational World Series and won the MVP award. In the regular season, he went 7-2 with a fine 2.19 ERA.


This date in baseball history:  In 1977, the special Negro League hall of fame committee dissolves after naming its last two inductees, pitcher/batter Martin Dihigo and shortstop John "Pop" Lloyd. After this, Negro League veterans will be considered by the Veterans committee.
Posted by Jets Break Jaws at 7:16 PM