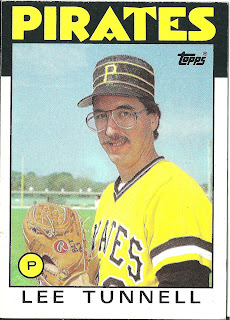 The player:  Tunnell started his career as a hot pitching prospect, finishing in the top ten in Rookie of the Year voting with a 11-6 record in 1983. He was also 5th in shutouts and 6th in winning percentage that year. But his promise didn't translate into continued success, and the rest of his career was spotty. Tunnell was shifted to long relief in 1984 and ERA climbed to 5.27. Then, in the season shown on this card, he was moved back to the rotation but was similarly unsuccessful, going 4-10 with a 4.01 ERA.

After being "banished" to the Hawaii AAA club for the 1986 season (and going 4-11 with a 6.01 ERA), Tunnell was signed by the Cardinals and resurfaced with them for the 1987 season, where he pitched okay in a long relief/spot starter role. He pitched better in the World Series, giving up only 1 run in 4 1/3 innings of work. Tunnell would pitch 10 more games with the Twins in 1989 before playing Japan for three years.

Tunnell has had a long career as a pitching coach in the Rangers minor league organization, and he was even the interim bullpen coach for the Reds for a season. He is now the Brewers minor league roving pitching instructor. 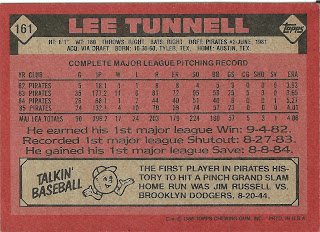 Rear guard: Tunnell's first and only major league save came in a three inning relief stint of #140 John Candelaria. He gave up no runs on two hits, walked one and struck out three. The game ended when Cardinals catcher Darrell Porter struck out.

Jim Russell was also the first player to homer on both sides of the plate in two different games in one season. Over his 10 year career with the Pirates, Braves, and Dodgers he hit 67 home runs.

This date in baseball history:  Minor leaguer Cecil Fielder, father of Prince, was traded on this day in 1983 from the Royals to the Blue Jays for reserve outfielder Leon Roberts. Fielder had led the short season Pioneer League in home runs and doubles the previous year, and of course would go on to have a stellar career, but not with the Blue Jays.
Posted by Jets Break Jaws at 12:23 PM

You know, Tunnell looks like the Pirates were trying to get a Kent Tekulve look-a-like contest winner on their team to remind them of better days. LOL