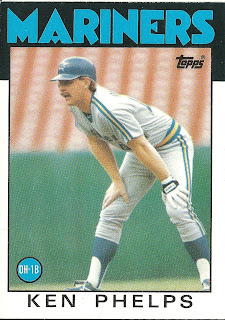 Card thoughts: Attendence was really down in baseball in 1985. Look at all those empty seats in centerfield! Also DH-1B was a very popular position in this era.

The player: Ken Phelps was a superstar hitter in the minors whose lack of defensive ability prevented him from making much of a major league impact. As a part time player he did show flashes of power including 24 HRs in 290 at bats in 1984. But he never could seem to find a home for long, playing with the Royals, Expos, Mariners, Yankees, A's, and Indians during his 11 year career. He was part of a memorable trade, when the Yankees sent a young Jay Buhner to the Mariners in exchange for Phelps. Buhner went on to become a star with Seattle while Phelps never batted above .250 with the Yankees. Here's Frank Costanza on Seinfeld ranting about this trade.

Ken Phelps spent a year as the color man for Arizona Diamondbacks broadcasts. He currently works as an analyst for Fox Sports  in Arizona and does PR work for Arizona Public Service, a utility company. 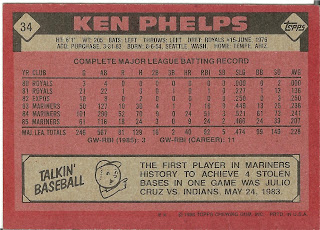 Rear guard: Julio Cruz is discussed at length about 20 cards ago. This statistic does not appear as one of Topps' "firsts" however.
Posted by Jets Break Jaws at 10:17 AM