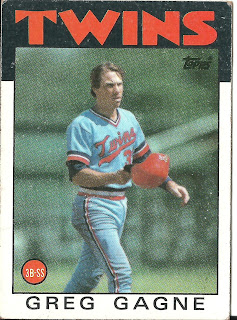 Card thoughts:  This is Gagne’s first Topps card. He had a “Rated Rookie” card issued by Donruss the previous year. Also, Gagne only played shortstop this year.
The player: Gagne (pronounced Gag-ni not Gan-yea) was originally drafted by the Yankees in 1979, but like a lot of prospects at the time, he was dealt in the early 80s for a proven player, in this case Twins shortstop Roy Smalley. Gagne, starting his rookie year, was a regular shortstop every year for the rest of his career. Besides being durable, he was a proficient, although sometimes erratic fielder. Gagne led the league in errors in 1986 and 1995, but also led in putouts, fielding percentage, and range factor on different occasions. He also once “fielded” a rat in a game at old Municipal Stadium in Cleveland.
Gagne was no great shakes with the bat, or as a base runner. He only had a career 53% success rate as a base stealer, and he struck out a lot and didn’t walk much, even though he had little power. He did once hit a record two inside-the-park home runs off #64 Floyd Bannister. Despite the one dimensional nature of Gagne’s game, he was a bit of a folk hero in Minnesota, mostly because he played well on both of the Twins World Series winning teams in 1987 and 1991. In 1987, he had a career high .740 OPS, on the strength of 28 doubles, 7 triples, and 10 home runs. He only hit .200 in the World Series that year, but drove in 3 runs. In 1991, he hit 8 home runs and drove in 42 with a .265 average.
Eventually, Gagne got too expensive for the Twins and he signed with the Royals in 1993. He responded with a career high 57 runs batted in and .280 average, but his average dropped each year the remainder of his career—two more years with the Royals and two with the Dodgers. Gagne finished in 1997 with a career .254 average and an abysmal .303 on base percentage. However, his fielding percentage as a shortstop was impressive at .972. Gagne currently coaches baseball at a Catholic high school in his hometown. 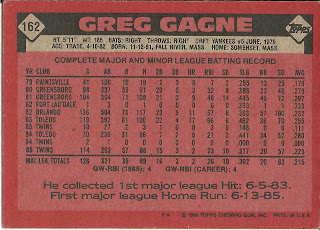 Rear guard: Gagne's first major league hit came against the Red Sox in his first major league game. It was a double off Doug Bird to lead off the 6th inning. He immediately scored the Twins' 6th run on a Mickey Hatcher double.
This date in baseball history: Ted Williams becomes the highest paid player in baseball history in 1958, signing a one-year contract for $135,000. This would be about a paltry 1 million dollars today, the same as a backup infielder makes.
Posted by Jets Break Jaws at 8:43 PM