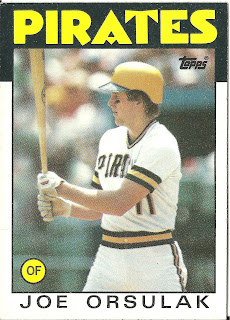 Card thoughts: This is Joe Orsulak's rookie card. Look how small his arms are! This is before every ball-player doubled as a weightlifter.

The player: Orsulak was your classic fourth outfielder, who occasionally became a starting outfielder by default when a rookie didn't pan out, or the starter got injured. In the year represented by this card, he hit over .300 with little power and good speed and was 6th in the Rookie of the Year voting. After breaking his ankle which caused him to miss all of the 1987 season, he was traded to the Orioles for two minor leaguers. This is where Orsulak made his greatest mark. He continued getting about 350-400 at bats a year, but hit with more power at Memorial Stadium, even reaching double digits in home runs in 1990, when he hit 11 home runs and drove in a career high 57. Orsulak continued to have a productive career as a reserve outfielder with the Mets, Marlins, and Expos before retiring after 16 years in 1997. What Orsulak has been doing after retiring? Answer: not much. 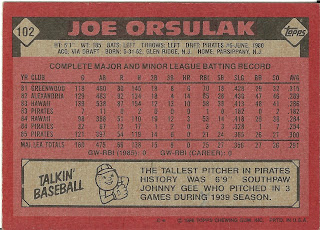 Rear guard: Johnny Gee only pitched in 44 games in a 6-year major league career interrupted by the war. He went 1-2 in 3 starts in 1939. Gee played professional basketball for the Syracuse Nationals with the NBA after retiring from the New York Giants. The team became the Philadelphia 76ers in 1963.
Posted by Jets Break Jaws at 5:03 PM