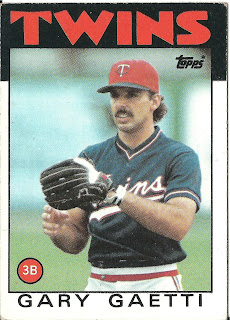 Card thoughts: Oh, Gary Gaetti. I always irrationally loved Gaetti from afar. Maybe it was the way the name rolled off the tongue. Gaetti's batting glove beneath his fielding glove is glowing oddly ala Michael Jackson.


The player: Gaetti was a mainstay of the Twins throughout the 80s, winning gold gloves four consecutive years 1986 to 1989, and going to the all-star game in the latter two years. He consistently hit with power, hitting over 20 home runs 6 out of the 9 years he was with the Twins, although he never hit for a high average and he barely walked, which limited his effectiveness as a batter. His best season was 1986 when he hit 34 home runs and drove in 108 (he would follow with a similar season the next year). But Gaetti's average began to fall after those two great seasons, and he signed with the Angels in 1992. Away from the Metrodome, Gaetti's power disappeared, which really exposed his lack of on-base ability. The Angels released him with a year and a half left on his contract and he was picked up by the Royals where he had a career resurgence, hitting 35 home runs in 1995. That was enough to interest the Cardinals, where he had three decent seasons before they released him midway through the 1998 season.

And this where I really started to love Gaetti. He came to the Cubs, and hit everything in sight, sparking the team and getting them to a tie with the Giants for the wild card. In the one game playoff, I'll never forget Gaetti hitting the big blow, a two-run homerun off of Mark Gardner, my hands shaking with stress as I chain smoked hand-rolled cigarettes in a Portland sports bar, a lonely expatriate in a land of (mostly) expatriate San Francisco fans. He would have one more season with the Cubs where he hit a dismal .204. After 5 games with the Red Sox at age 41, he retired. After his career ended, he was the hitting coach for a time for the Astros. He will manage the Sugarland Skeeters of the independent Atlantic League next year. 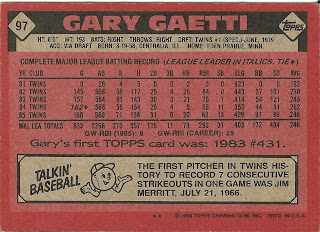 Jim Merritt struck out a lot of people that day, but he didn't strike out 7 in a row.
Posted by Jets Break Jaws at 10:56 PM