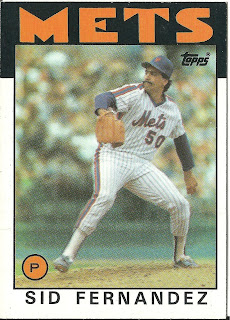 Card thoughts: I don't remember Fernandez with a mustache, but I guess my memory is faulty because most cards show Fernandez with a 'stache. Also, I think that the New York teams have a lot more action shots than the other teams. New York based photographers perhaps?

The player: Sid Fernandez is third all-time in least hits given up per 9 innings, behind Nolan Ryan and Sandy Koufax; he also walked and struck out a lot of batters. His out pitch was a devastating curve ball and rising fastball, which was doubly hard to hit as Fernandez used a side arm motion to deliver the ball to the plate.

Fernandez broke in with the Dodgers but was soon traded to the Mets, where he spent most of his years. He wasn't always a big winner despite a low ERA, partly because he tired easily and didn't pitch deep into games. This also translated into the regular season, where he generally had a smoking first half, only to stumble down the stretch. He also benefited from pitcher-friendly Shea Stadium; his ERA was 2 runs less there than on the road. Fernandez won a career-high 16 games during the Mets championship 1986 season, but after a poor start in the NLCS, Fernandez pitched out of the bullpen in the World Series. He was very effective in that role, striking out 10 batters while walking only 1. He won in double digits the next couple of years and in 1989 led the league in winning percentage to go along with 14 wins. The next couple of years were marred by injuries, but he had comeback year in 1992 when he again won 14 games.

That would be his last year as an effective starter, as he left the Mets for the Orioles, Phillies, and Astros, retiring in 1997. 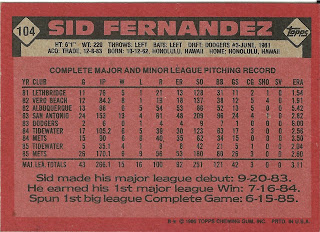 Rear guard: Fernandez is one of those rare players from Hawaii. He was even once traded for a Hawaiian! His first win was in a blowout against the Astros. Uncharacteristically, he gave up more than a hit per inning.
Posted by Jets Break Jaws at 9:35 PM