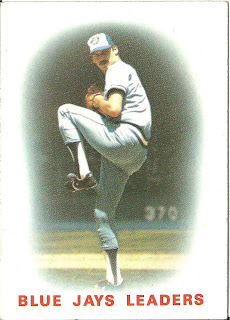 Card thoughts: The Blue Jays won the American East this year for their first division title. They were a team to be feared throughout the late 80s/early 90s before the New York Yankees started winning all the time.

The player: Jim Clancy was the longest tenured Blue Jay at this point, appearing in his first games as a Jay on July 23, 1977 having been taken from his original organization, the Texas Rangers, in the expansion draft . Ernie Whitt, the Blue Jays starting catcher, also appeared at the end of the 1977 season. However, he spent all of 1979 in the minors. The 2nd longest continuing servant of the Blue Jays was first baseman Willie Upshaw, appearing in his first game April 9, 1978. 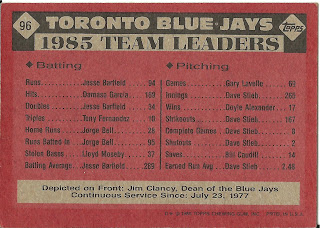 Rear guard: I remember being really impressed with the Blue Jay outfield. I could never decide who was the best player: Jesse Barfield, George Bell, or Lloyd Moseby. You can see that they led in most of the offensive categories. On the pitching side, Dave Stieb's 2.48 ERA led the league and he dominated the starting pitching categories, but Doyle Alexander, whose ERA was a full run higher, was the Blue Jays' winningist pitcher. The Blue Jays also had three pitchers with double digits in saves. Tom Henke was the best of the trio.
Posted by Jets Break Jaws at 9:50 PM

that outfield had alot of potential. each were only 25, yet moseby and barfield would fall off a cliff in a few years, bell tapering off in his early 30's. moseby may have had the most talent, a nice combo of power and speed.
http://www.baseball-reference.com/teams/TOR/1985.shtml

1985 was the first year that the Jays broke through and won a division title, only to have their hearts broken at home in the LCS by Jim Sundberg...a great season for Jays fan though. Bell in my opinion was the best of the three, at least at the plate.