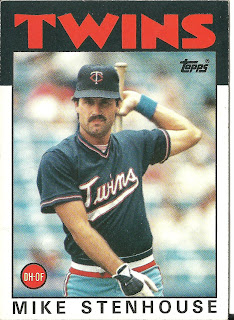 Card fact: Third mustache in a row! And this was the only year Mike Stenhouse DH'd . . . although if Topps used a "PH" position circle that would have been more appropriate here. He appeared on the 1984 Father/Son card with his father Dave Stenhouse.

The player:  Mike Stenhouse was a smart guy: He rejected several sub-par draft offers to go to college and it was a good choice. He was an all-American at Harvard and was finally drafted at #1 by the Expos in the days when two drafts were held a year--he was drafted in the January draft of 1980. He lit up the minors, with a high on base percentage, decent average, and some power. He won the AAA MVP award in 1983, leading the league in average, slugging percentage, and on base percentage while hitting 25 home runs and driving in 93. However, this success never translated to the majors where his career average was below .200. The year shown on this card would be his only full year in the majors.

After his playing days, he spent one year as an Expos broadcaster. 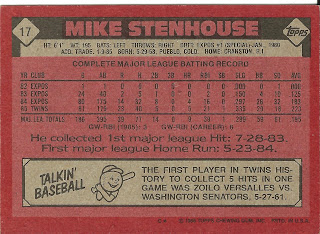 Rear guard: I always loved the name Zoilo and that guy was a hitting machine. Stenhouse's first hit was a double off of the Cardinals' Bob Forsch in the second game of a double header. He played first in that game.
Posted by Jets Break Jaws at 9:50 PM