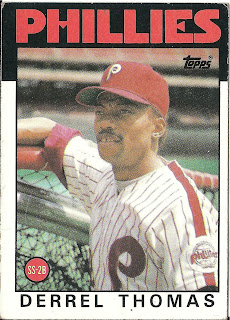 Card thoughts: I still remember being freaked out by this card as a child. Probably the ugliest photo in the set. This picture of Thomas makes him look like a sinister 75 year old man, but he was only 34 at the time. He looks like a completely different person when he was younger. This would be Thomas’ final card.
The player:  Thomas was a switch-hitting, versatile player who filled several different roles in his 15-year career: All around utility player, reserve infielder, starting centerfielder, starting second baseman, and starting shortstop. He ended up playing every position except pitcher at least once during his career. Known as a cocky, stubborn player, Thomas was involved in several controversies in his career.
But he was put in the lineup for his hitting, not for his glove or attitude. Thomas was drafted first overall in the 1969 draft by the Astros, but he only got a 5 game trial for them in 1971. He was dealt the following season to the Padres for pitcher Dave Roberts. Thomas was the Padres starting second baseman in 1972, and their starting shortstop the following year. But Thomas was a bad fielder at both positions, especially shortstop, where his career fielding percentage is a lowly .937. His hitting didn’t make up for it, as he hit about .230 every year with no power. His hitting improved enough in 1974 to be attractive to the Giants (and the move back to second improved his fielding), who sent Tito Fuentes (a much better hitter and defensive second baseman) and Butch Metzger (who won the Rookie of the Year in 1976) to acquire him.
The Giants wisely kept him at second base and, although he still made a lot of errors, Thomas began to hit the ball with more authority, getting his OPS above .700 for the first time. In his first year with the Giants, Thomas reached career highs in runs (99), hits (149), RBIs (48) and batting average (.276). But Giants decided they couldn’t continue to stomach his inconsistent fielding and he was switched to the outfield for the 1977 season. Relieved of the pressure of being an infielder, Thomas had one of his better seasons at the plate and in the field. Playing a career high 148 games, he was 5th in the league with 10 triples, while hitting 8 home runs, driving in 44, and hitting a respectable .267. He also made only 2 errors at his new position.
The Padres got him back for one season and the Dodgers signed him to a five year contract in 1979 to be their starting centerfielder to replace Bill North. Thomas had one of his typical seasons (except that he overslept for a game on July 11), but it would be his last as a starter—although it would not be the last strange incident in his career. In 1981, Thomas was caught by the FBI for piloting an impounded boat of a missing embezzler.
With his hitting in decline, he would be relegated to a utility role for the rest of his career. But more controversy followed him. When Thomas was released by the Expos in 1984, he accused the team of racism, but later angrily denied that he had said so; later that year, the Angels released him due to rumors of a drug problem, fueled by Dave Parker’s testimony at the Pittsburgh drug trials (Thomas denied he had a drug problem).
As an aging player with an increasingly bad reputation, no major league organization would touch Thomas. He was forced to play with the few independent teams that operated at the time. First, he was first cut by the independent San Jose Bees for having a bad attitude, and then was toiling in obscurity for the independent (not the major league team of today!) Miami Marlins in the Florida State League when the Phillies bought him on May 15. It was a short reprieve as that season would be his last in baseball.
Thomas managed in the minors briefly and for a time he was broke and got in trouble with the law. This column sums up the tribulations he went through after his baseball career. But Thomas eventually turned his life around and currently works in the Dodgers front office as a representative for the Dodger Legend Bureau (although I doubt any Dodger fan would consider him a legend, although he did hit .444 in the 1983 NLCS). 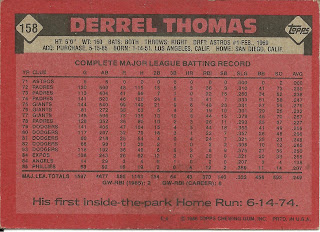 Rear guard:  The home run was hit at Jarry Park, the old home of the Montreal Expos, which had an incredibly deep center field (417 to straightaway center and 380 in the alleys) where Thomas hit the ball. It drove in hall-of-famer Willie McCovey and Johnny Grubb. Thomas would later drive in McCovey again with a single.
This date in baseball history: (New feature!). In 1976, umpire Cal Hubbard, third baseman Fred Lindstrom and  first baseman Roger Connor were elected to the hall of fame. Hubbard holds the distinction of being the only person in two hall of fames (he's also in the football hall of fame as a player). Connor was the all time home run champ until Babe Ruth came around. He played solely in the 19th century, so his 138 home runs may not seem like much, but the record stood for 23 years. Lindstrom was a controversial pick for the hall of fame. This was in the Frankie Frisch dominated era of the veterans committee, and several players seem to have made it in based on the fact that they played with Frisch.
Posted by Jets Break Jaws at 7:35 PM