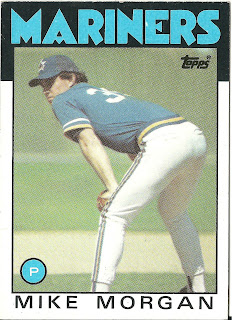 Card thoughts: I always found it odd when there was a shot of a player in a game situation, yet no other player is visible. And because of Morgan's positioning, he looks like he's leading off first, although the faint trace of the glove on his right hand indicates he's pitching. This was his first card as a Seattle Mariners, at the time his fourth team.
The player:  The first word you think about when you think Mike Morgan is perseverance. The man pitched 25 seasons, in four different decades, for a record 12 teams (shared with Octavio Dotel and Ron Villone . . . Matt Stairs holds the all time record for position players). The other word that would come to mind is: mediocrity. Morgan's first winning season was his 11th, he lost 10 games or more 12 times, and his career record is a miserable 141-186, a .431 winning percentage. Never has a man pitched so consistently poorly for so long.
But Morgan might have been cursed from the beginning. A first round draft pick for the A's in 1978, he went directly to the majors from high school. As you might expect, it did not go well. Although he featured four pitches (fastball, slider, change, curve), he couldn't locate any of them. After a 0-3 start and a ERA over 7, Morgan was sent to the minors where he should have been in the first place. Inexplicably, the A's didn't learn from their mistake and he was in the starting rotation again the next season. He went 2-10 with a 5.94 ERA and had an amazing 50 walks to 17 strikeouts. He was sent to the minors for two seasons, resurfacing with the Yankees in 1982. Forever after, Morgan became known as "The Nomad."
It was the Blue Jays in 1983, the Mariners from 1985 to 1987 (led the league in losses with 17 in 1986), and the Orioles in 1988. He had his greatest success with the Dodgers from 1989 to 1991. He led the league in shutouts in 1990, despite a 10-15 record. And he made the all star team for the only time in 1992 when he went 14-10 (his first winning season) with a 2.78 ERA. The next year he was even better, his first for the Cubs (1992 to 1995). He went 16-8 with a stellar 2.55 ERA. But this would be his peak, as he had only two more winning seasons the rest of his career.
Battling injuries and wildness, Morgan was once again largely ineffective as a starter for the Cardinals (1995 to 1996), Reds (1996 to 1997), Twins (1998), Cubs again (1998), and Rangers (1999). Although he did manage a 13-10 record with the Rangers, his ERA was a stratospheric 6.24. It was that season where Morgan finally began to pitch regularly out of the bullpen, where he should have been put years ago. With the Diamondbacks (2000 to 2002), Morgan pitched decently enough out of the bullpen in a variety of roles. Especially noteworthy is the 3 games he pitched against the Yankees in the 2001 World Series without allowing a run.
If you like to kill animals, then Mike Morgan will take you hunting with his company World Champion Outfitters. 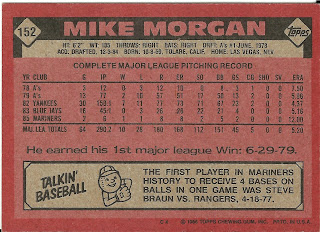 Rear guard: Wow, look at those awful ERAs. Morgan's first win did not come on June 29th; the A;s didn't even win that day, and Matt Keough took the loss. Instead, it came on July 29 (7-29-79) against the Mariners. Both he and #64 Floyd Bannister pitched complete games, but Morgan was just a bit better, giving up 1 run on 3 hits. But true to his early career pattern, he walked 4 but only struck out 1.
Steve Braun will be discussed at greater length when his card comes up later on this blog.  Braun always walked more than he struck out. Braun had no hits that day, but scored one run. This was his card from that season.
Posted by Jets Break Jaws at 10:49 PM

Card caption: "I want you to stick it riiiiight here..."

Love the blog, hate the colors.

Thanks! I was getting sick of the old style too.

One more suggestion--can you make linked text some color or style that is different from the default white? Right now links are difficult to identify.