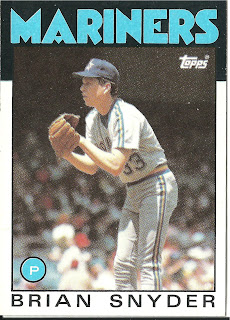 Card thoughts: This is Snyder’s only Topps card. It was likely taken at Tigers Stadium, the same day at the #61 Karl Best card.
The player:  Not a good rookie choice for Topps to pick for its set. Snyder had a really bad minor league career, where, as a starter, he couldn’t get his ERA below 5. As a reliever, he was average, with ERAs sitting at 4. Snyder was likely only called up because he was a lefty and the Mariners in the 1980s were a laughing stock. After 35 terrible innings (with an inexplicable 5 starts!) where his WHIP was 1.783 and his ERA a ghastly 6.37, Snyder was released by the Mariners.
Snyder signed with the Padres, and was effective as a left-handed reliever for their AAA club, but not effective enough to make it back to the majors. He got another shot with the A’s in 1989 when, after a 6-0 record with AAA Tacoma (and a 2.12 ERA), he was called back up to the majors in June. Snyder pitched 2/3 of the 13th inning against the Blue Jays, when he gave up a home run and struck out one; he couldn’t even get an out in his only other outing against the Twins.
After another minor league season with the Braves in 1990, Snyder called it quits. His son, Brandon Snyder, has made it to the majors with the Orioles as a catcher. 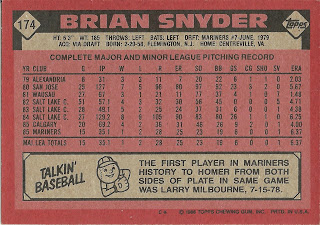 Rear guard: Larry Milbourne was a utility player, playing for 6 different teams in an 11 year career. Incredibly, he only hit 11 home runs overall, and never more than 2 in a season, which makes this feat as remarkable as it is rare. The Indians were the unlucky victims of Milbourne's day long power surge.
This date in baseball history: The demolition of Ebbets Field, the former home of the Brooklyn Dodgers, begins in 1960, giving lazy Brooklyn born writers a sellable nostalgia story for years to come.
Posted by Jets Break Jaws at 9:50 PM