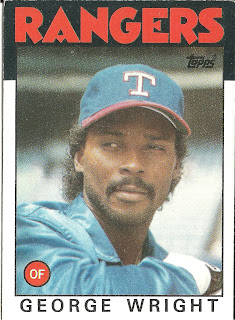 Card thoughts: #105 Gary Ward and George Wright must go to the same barber. And man, does Wright look pissed off.

The player: George Wright was a phenomenal young player, whose career got sidetracked in only two years due to injury. His career as a study in contrasts: He had great speed, but barely stole any bases. He had great range in center, but made some catastrophic errors.
Wright had a good start to his career. Not even expected to make the team out of spring training, he became the starting centerfielder for the 1982 Rangers. He had a respectable 11-50-.264 batting line in 150 games. The next season would be Wright’s best. Appearing in every game, he got 175 hits, hit 18 home runs, and drove in 80. Alas, it would be the last year Wright was any good. Injuries took their toll in 1984, and Wright’s average dropped 30 points. He also tied an American League record by stranding 11 players on the bases in a game against the Red Sox. He was even worse the next two seasons, hitting .190 and .202 as he relinquished his starting role to the aforementioned Gary Ward. He experienced further ignominy when his three base error (in a game in which Charlie Hough was pitching a no-hitter) cost the Rangers  the win, and (and Hough the no-hitter).
Wright was released by the Expos at the end of the 1986 season (he hit .188 in a half a season with them), and spent the rest of his baseball career cycling between AAA and Japan. 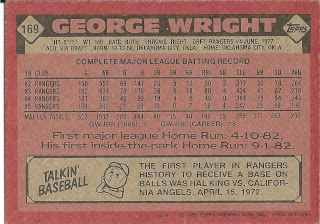 Rear guard: Wow, Wright's drop in offensive output is really apparent on the back of his card. His first home run came in his first major league game--opening day, 1982. The victim was pitcher Indians pitcher Rick Waits. He later had a double and a single, and went 3 for 4 with 2 runs scored and 3 runs batted in that game.
Boy, way to dredge up the excitement, Topps. The base on balls has got to be the most boring play in baseball. Well, if you were ever burning to know who was the first person to take a walk for the Rangers, now you know. Hal King had a pretty good batting eye, walking 104 times in 799 plate appearances in his 12 year career. He actually walked twice in that game.
This date in baseball history: Boston Braves third baseman Tony Boeckel was the first player killed in a car accident. Luckily, Bob Meusel, the Yankees star outfielder, escaped serious injury in the wreck that happened in 1924.
Posted by Jets Break Jaws at 7:50 PM