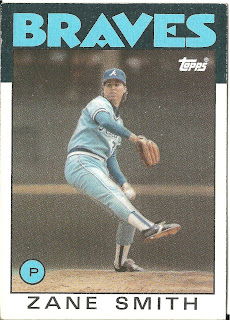 Card thoughts: I believe this picture was taken the same game as the #129 Jeff Dedmon photo in the Astrodome. This would be the June 27, 1985 game where Smith beat #100 Nolan Ryan 4-1. Dedmon relieved him in the 6th inning. Other than that, I always thought Zane Smith was one ugly player, but I may have been influenced by his hideous mullet. I sometimes have the same feelings about Randy Johnson. This was Zane Smith's first Topps card.

The player: Smith was an inconsistent pitcher who won exactly 100 games in his career, but finished with a sub .500 record. He is also the only major league player that I know of that was traded for former Rockford Expos two different times (Nate Minchey and Willie Greene). Smith began his career as a reliever. but the Braves lack of quality starters forced him into the rotation his rookie year. He had a 9-10 record, and lost another 16 games the next year. Like a lot of lefties, it took awhile for Smith to find his groove, but he turned it around in 1987, winning 15 games and leading the league in games started for a last place team. Unfortunately for Smith, he would not share in the Braves renaissance in the 1990s, as he was traded to Montreal in 1989 after going 1-12 for the Braves.

At the end of the next season, he was traded to the Pirates (for future star Moises Alou) who were in the midst of winning three consecutive NL East titles. Smith was phenomenal down the stretch, posting a 1.30 ERA over 10 starts. Overall, his 2.55 ERA was second in the league. His success did not carry over to the NLCS, as he lost both games he pitched in. The next season, Smith had a career year, winning 16 games against 10 losses with a 3.20 ERA. This time, he pulled his weight in the playoffs against his former team, winning and losing one 1-0 game.

Smith was injured the next couple of years, but managed a double digit win season one more time (1994) before he left the Pirates. He signed with the Red Sox in 1995, but he had a high ERA at 5.61. After coming back for one last season with the Pirates (and another ERA over 5), Smith retired when no one offered him a contract. 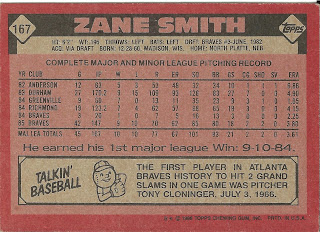 Rear guard: You can see Smith was inconsistent in the minors as well. Smith's first win came against the Astros. He gave up 6 hits and one run, and his mound opponent was Nolan Ryan in a game similar to the one pictured on the card.

A pitcher hitting two grand slams in a game is pretty incredible. As a pitcher, Cloninger had one 20 win season, but he was mediocre overall. But he was one of the better all time hitting pitchers. In 1966, Cloninger hit 5 home runs, drove in 23 runs, and hit .234. For his career, he hit .192 with 11 homers. Cloninger's 9 RBIs in that game is a record for pitchers. Here's his card from that season. He looks tough!

This day in baseball history: As a reminder that Jackie Robinson did not break all color barriers in baseball, the Georgia Senate banned blacks and whites playing baseball together unless it was a church gathering. Sadly, this was in 1957, not 1857.
Posted by Jets Break Jaws at 8:19 PM