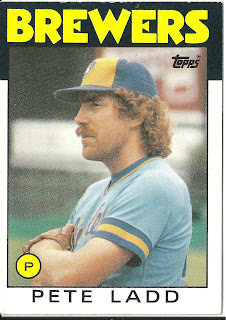 Card thoughts:  I was going to say that Ladd looks like a surly fisherman in this photo; however, it’s much better than his cards with the Mariners where he looks like a grade A doofus, or an understudy for Weird Al Yankovic. This was Ladd’s last card as a Brewer.

The player: It was a struggle for Ladd to stick in the majors. He was drafted by the Red Sox in 1977, then was sent to the Astros while he was in AA ball for future National League president Bob Watson. After a cup of coffee with the Astros in 1979, Ladd was sent to the Brewers for Rickey "Buster" Keeton who never pitched in the majors again. Ladd pitched down the stretch in 1982 for the Brewers, and was pressed into closer duty in the ALCS after Rollie Fingers was injured. He pitched well out of the pen in that series, saving two games, walking none and striking out five. In the World Series, he blew a lead and was never used again. Ladd expounds on the experience here (recommended if you want to hear some great Northern American accents!)
But there were no hard feelings, and the next season Ladd had a career year. Pressed into closer duty when Fingers missed the entire season, his 25 saves were in the top 10 in the league, and he also sported a career low 2.55 ERA. It was back to middle relief the next two seasons, and Ladd was mediocre, giving up way too many homers and featuring ERAs in the high 4’s and low 5s. The Brewers finally released him after the 1985 season, and he signed with the Mariners where he had another poor year, and then never resurfaced in the majors again.
Ladd has a pretty good singing voice, as evidenced by his parody of “Knocking on Heaven's (Gorman’s) Door” at a Brewers fantasy camp. He currently works in counter sales at the Hancock Lumber Company in Maine. 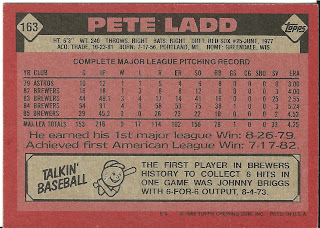 Rear guard: I don't think it's necessary to note Ladd's first American League Win; he only had one win in the National League. For his first win, Ladd pitched the 7th and part of the 8th inning to pick up the win in relief of Rick Williams. He struck out two Phillies, walked one, and gave up no runs.
Johnny Briggs was a steady first baseman with a little power, but he didn't hit for average. Most of his career was spent with the Phillies. The year he went 6 for 6, he only hit .246. Among the six hits were two doubles and four singles. The Indians starter that day, Dick Tidrow, managed to give up five of the hits (out of a total of 14!). Here's his card from that year.
This date in baseball history:  Yankees outfielder Joe DiMaggio signed the first $100,000 contract in baseball history in 1949. This would be $945,000 today.
Posted by Jets Break Jaws at 8:18 PM

Check out that melon! If his head were any bigger he'd look like a bobblehead!