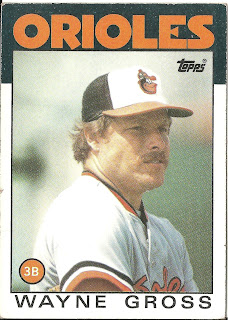 Card thoughts: Gross means “big” in German. Perfectly appropriate for Wayne, who was big by the day’s standards, weighing in at over 200 pounds. This was Gross’ last baseball card.
The player:  Gross was a dead pull hitter with good power. Unfortunately, since he only pulled the ball, he tried to hit a home run every time, which meant his average tended to suffer. Strangely enough, he did not strike out a lot and had a good batting eye. Despite a career batting average of .233, he finished with an OPS over .700 six times in his 11 year career.
As a rookie with the A’s, Gross made the all star team, despite batting only .233 (He also earned an all star rookie cup on his card). He showed good power, however, with 21 doubles, 22 home runs, and 63 RBIs. He also walked a career high 86 times (4th in the league). He was not a good fielder, however, and the led the league in errors by third basemen with 27.
The next few seasons, Gross struggled to hit above .200, while still displaying respectable power. He seemed to rejuvenate his career in 1980 when he hit a career high .281 and drove in 61 runs. But after that season, Gross continued to be poor in the clutch and in the field. He lost his starting third base job to newcomer #134 Carney Lansford in 1983, and spent that year platooning at first base with Dan Meyer.
No longer needing Gross at third, the A’s traded him the following season to the Orioles for Tim Stoddard. He had a bit of a comeback year the first year he played with his new team, hitting 22 home runs, matching his career high his rookie year, and driving in 64, a new career high. But he hit only .216, which boded ill for his future.
In his last full season in the majors, the one shown on this card, Gross had one of the oddest batting lines ever. Perhaps as a result of his diminished ability to hit, he was especially tentative at the plate. 20% of his 51 hits were home runs (11). However, Gross drove in only 18 runs with those 11 home runs. He also walked only 5 less times than he hit his way on base. This meant that Gross had his second highest OPS ever at .793, yet hit a very unproductive .235 and created very few runs.
Gross was released by the Orioles after being cut after spring training in 1986. He signed a minor league deal with the A’s and he spent much of the season at AAA Tacoma before getting called up in September for his last 3 major league plate appearances. 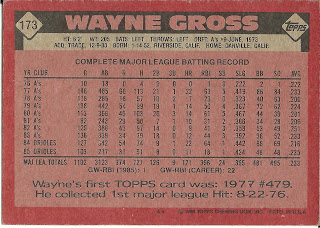 Rear guard: Gross' first Topps card was a "Rookie Outfielders" card. Which may explain why he was never a great third baseman. Check out especially the guy in upper left corner, Brian Asseltine. He looks like Prince Valiant. Asseltine and Mejias were reserve outfielders. Al Woods had a couple of good seasons as a regular, but only lasted until 1983. Wayne Gross was the only rookie outfielder who made any impact.

Gross' first hit came as a pinch hitter for catcher Larry Haney. It was off Red Sox pitcher Jim Willoughby.
This date in baseball history: Walter Johnson throws a ball across the Rapahannock River in 1936. This event is supposed to duplicate George Washington’s mythical toss of as silver dollar across the river.
Posted by Jets Break Jaws at 8:17 PM