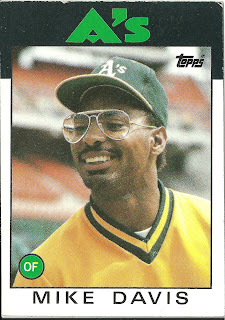 Card thoughts: "Ooh, what lovely bag of candy!  May I have a teensy, weensy, little piece." Or Davis could be ogling the photographer.

The player:  Davis had a short career, but over a three year span, he was a great power hitter. He came up originally with A's in 1980 as a backup outfielder but hit poorly in 51 games, and spent much of the next two seasons in the minors. He came up for good in 1983 and was named the A's starting right fielder. Davis showed good clutch hitting, driving in 62 runs despite having only 8 home runs. He showed he had good speed also, swiping 32 bases. The next year was a struggle, and Davis hit only .230 while leading the league in errors committed by an outfielder. But the season represented by this card, Davis really broke out. He started hitting the ball with more authority, hitting 24 home runs, 3 times his previous career high. His speed helped him score 92 runs. Based on WAR, Davis was the fifth most valuable outfielder in the league. In 1986, his numbers took a bit of a tumble but the power and speed ratio remained constant.

1987 was a season similar to Davis' 1985 campaign and netted him a big contract with the Dodgers. Here's where his career started to crater. Davis felt a lot of pressure to live up to him big contract in 1988 and he hit only .196, and Mike Marshall was moved from first to right field to replace him as a starter. But it wasn't all doom and gloom for Davis, as he relates here in his account of the greatest game of his life. He played an integral role in one of the greatest World Series comebacks of all time. In Game 1 of the 1988 World Series, Davis walked ahead of Kirk Gibson's game winning home run off Dennis Eckersley, which is remarkable itself, in that Eckersley barely ever walked anyone. In Game 5, Davis hit a 2 run home run for his only hit in the series (although he did walk 4 times) to put the Dodgers in the lead for good in the deciding game.

The afterglow of World Series triumph did not help him the next season, when he hit .249 in a part time role. Davis would give up the game after that season at young age of 30. 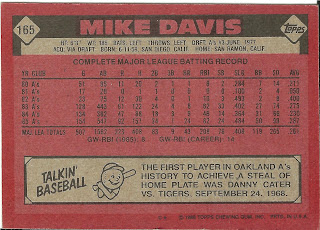 Rear guard: Steals of home plate have become much rarer, due to the increasing prevalence of the sidestep. It was off of Gary Peters, and was against the White Sox, not the Tigers. Here's Cater's card from that season. He would have a 12 year career with the Phillies, White Sox, A's, Yankees, Red Sox, and Cardinals. He was not known as a speed guy, only averaging 3 steals a season. Cater's season high in stolen bases was only 8 happened to be the year he stole home--1968.

This date in baseball history: In 1971, former first baseman Bill White was hired by the Yankees broadcasting team, guaranteeing that he would become the first African American to do play by play regularly for a team.
Posted by Jets Break Jaws at 12:48 PM

Hi, I liked your blog and I invite you to join our website http://www.coollectors.com - The World's Free Collectors Zone.
Hope to see you soon -:)
Thanks,
Shelly