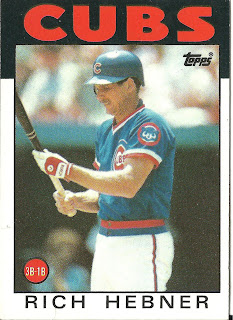 Card fact: This is Rich Hebner's last Topps card after having 17 previous ones.  In most of them he's smiling including on this card, when it looks like he's checking his bat for a crack. His first card was one of the few Topps "Rookie Stars" cards where both players had long, productive careers. The other player? Al Oliver.

Card thoughts: The first Cubs card in the set and I have no recollection of Hebner, even though I started avidly following the Cubs around this time. Maybe because of the fact that he only took the field in 22 out of the 85 games he played in 1985. The rest were pinch hitting appearances, most likely many were well past my 10-year-old bed time.

The player: Rich (generally known as "Richie" except by Topps) was a solid third baseman for several great Pirates teams of the 70s. Definitely in the lineup for his hitting (his career fielding percentage at third is a lowly .946), Hebner averaged around 15 HRs, 75 RBIs and .275 average during the decade when he was a regular (1969-1979). In his younger days, he was in the playoffs 7 times in 10 years with a career post-season average of  .270 in 30 games. He got a World Series ring with the Pirates in 1971, despite the fact that he batted .167 (of course, that was against Palmer, Cuellar, Dobson, and McNally). By the time he reached the Cubs, he was almost exclusively used as a pinch hitter. He batted once in the 1984 NLDS and didn't get a hit. Oh, and in his early years he was a grave digger in the off-season. Apparently his dad owned a cemetery! 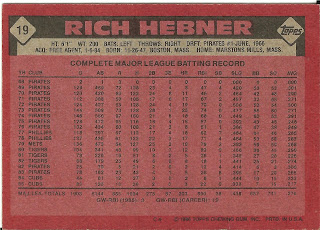 Rear guard: As a kid, I was always excited to get cards like this, where the player had played so long you could barely read the stats. With veteran salaries sky high, you don't find many players nowadays who are willing to play nearly half of their careers as a bench player after being a regular for some time.
Posted by Jets Break Jaws at 11:42 PM