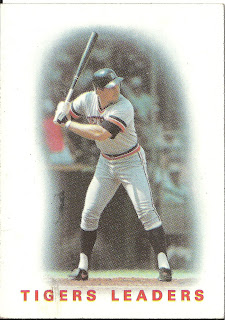 Card thoughts: This is the second subset of the 1986 Topps set. As a kid, these were useful cards, as you could figure out some of the better players on some of the more obscure teams. Otherwise, how else would I know which Seattle Mariner to trade for? As for the design, I really don't dig the ghostly halo around these players.

The player: In a wise move, Topps chose the longest serving player on each team to appear on the front of these cards. In this case, Lance Parrish barely beat out Alan Trammell, Jack Morris, and Lou Whitaker, who all got called up in September of 1977 but got into games later than Parrish. I miss the era when players stayed with their teams longer. Those are four of the greatest Detroit Tigers in the last 50 years and they had played together for 9 years at this point. You wouldn't see that today. 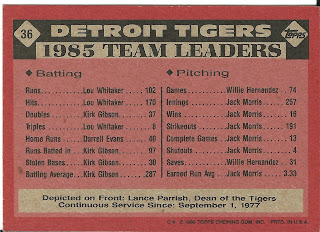 Rear guard: On the offensive side, Lou Whitaker (discussed earlier on this blog) and Kirk Gibson predominate. I always thought of Gibson as more of home run hitter, but Darrell Evans led the team (and league) in homers that year . . . at 40 years old. Gibby instead led the team in steals. On the pitching side, it's all Jack Morris with the relief leads going to Willie Hernandez.
Posted by Jets Break Jaws at 9:38 PM

Willie Hernandez really fell out of favor with Tiger fans in the latter half of the decade, but he was still a fan favorite in '85. Kinda odd, also, that Darrell Evans had 40 homers but didn't lead the team in RBI. That was back in the era of the high walk/high strike out/low batting average HR hitter (Rob Deer being the most extreme example), so maybe it's not that surprising. Off year for Trammell, from what I recall, but a really solid year for Lou, Gibby, and Morris. Coming off the '84 championship, though, this year was a total bummer...I think the Tigers were something really mediocre like 84-78 after that incredible 104-58 season.

Just took a look at the stats from '85 and, wow, the bullpen really fell off in performance compared to '84. The rotation was pretty good and most of the star players didn't slip too far (aside from Tram). It looks like your random bench players like Rusty Kuntz didn't really shine like they did in '84. Apparently that adds up to 100 fewer runs scored as a team.