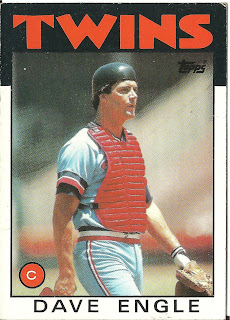 Card thoughts: I love the catcher cards in this set. Engle looks like he's taking a trip to the mound. Note the old style catcher hat, with no rear brim. Kind of like what a man shot out of a rocket would wear.

The player: Engle started out as an outfielder. He was thought of highly enough as a minor leaguer that the Twins obtained him along with several other players for Hall of Famer Rod Carew. The Twins moved him to catcher two years into his major league career so he could get more playing time. He responded well in his first year catching, having a career year in 1983 with 6 HRs, 43 RBIs and a .305 average. Likely based on that year, he was named as an all-star in 1984, despite average numbers.

Topps should have put DH-C in the position circle on this card, as Engle only caught 17 games in 1985 while DHing 39 times. This split came about when he became unable to throw accurately back to the mound after breaking a pitcher's nose with a throw while catching batting practice. Engle instead would lob the ball, which once allowed Alfredo Griffin to steal second on his throw back to the pitcher. In his later career, Engle played first, outfield (his original major league position) and third but mostly he was the designated hitter or pinch hitter. He would play for the Tigers, Expos, and Brewers before retiring in 1989. 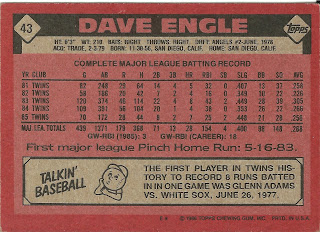 Rear guard: On my 8th birthday, Dave Engle pinch hit for catcher Tim Laudner and hit this solo shot in the 9th inning against the A's. Those 8 RBIs Glenn Adams drove in were 16% of his total that year. He never drove in more than 50 runs in a year.
Posted by Jets Break Jaws at 7:30 PM