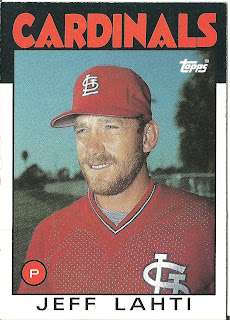 Card thoughts: A blah head shot of Jeff Lahti in spring training. Nice use of the bright foreground and dark background. Did Topps' spring training photographers only work at dusk?

The player: Lahti was originally drafted by the Reds and was traded to the Cards with a prospect for swing man Bob Shirley in 1982. A middle reliever for most of his career that relied on a fastball and slider, in the year shown on this card he had 19 saves as the right half of the right-left closer combination many managers used in those days. He also had an impressive 1.84. Unfortunately, in his two world series appearances with the Cardinals he was horrible, with a career 11.81 ERA. This would be his last full season, as in 1986 he blew out his shoulder and only pitched 4 more innings of pro ball before calling it a career.

Lahti returned to his native Oregon after his playing career and is presently an orchardist growing apples and pears. His daughter is supposedly dating a certain famous pro-athlete-philanderer. Type "Alyse Lahti Johnston" into any search engine if you are curious. 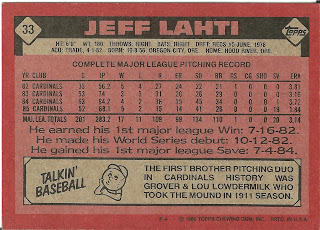 Rear guard: The Lowdermilk siblings won a combined 3 games for the Cardinals in 1911. Jeff Lahti's World Series debut was against the Brewers at the end of a 10-0 blowout in Game 1. He was terrible. He gave up 2 runs on 3 hits in only 1/3 of an inning.
Posted by Jets Break Jaws at 12:55 PM

Searching for the Best Dating Site? Join to find your perfect match.