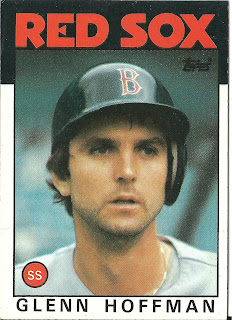 Card thoughts: I was horrified by this card as a kid. Hoffman looks like he's witnessing a terrible car crash. Maybe I was misperceiving this look. Perhaps he's just bored. Either way, a most unpleasant headshot.

The player: Hoffmann was your good field, no hit shortstop, so common in the 80s before the era of Alex Rodriguez. Hoffman was a particularly poor hitter, hitting only 23 homeruns and driving in only 210 runs in his 9 year career, despite being a regular shortstop for nearly half of it. His best year was 1983 when as the Red Sox regular shortstop he had 41 RBIs and had a .260 average to go along with a .340 slugging percentage. Despite this, he lost his job to Jackie Gutierrez and would never be more than a part-time player again. Hoffman would play for the Red Sox another year and a half after the year shown on this card until he was traded to the Dodgers for a minor leaguer who never made it to the majors. He ended his career with the Angels in 1989.

Hoffman then embarked on a long and successful career as a coach. He had various jobs in Dodgers minor league system, including manager, until he was called up from the AAA club in 1998 to take over for Bill Russell. He guided the Dodgers to a third place finish (with a 47-41 record under him). He then became a third base coach for the team and he's been one ever since, joining the rival Padres 2006.

You may have heard of Hoffman's little brother. His name is Trevor. Yeah, this guy. 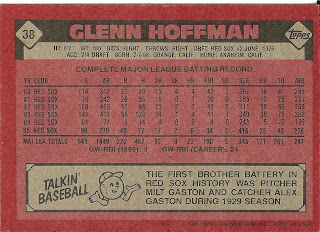 Rear guard: After the Father/Son series in the 1984 set, I guess Topps caught the family bug because there sure is a lot of brother trivia going on in the "Talkin' Baseball" box. Milt Gaston was the second leading pitcher on a last place Red Sox team going 12-19 with a 3.73 ERA. Alex Gaston was the third-string catcher and hit just .224 in 55 games. Alex was never more than a marginal player, but Milt had a long career, winning 97 games in 11 seasons. However, he lost over 164 games as well.
Posted by Jets Break Jaws at 10:53 PM