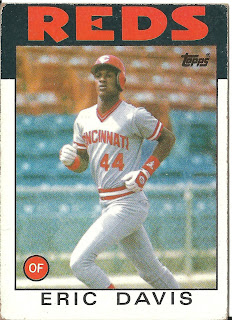 Card thoughts: I love this picture of Eric Davis, and I remember getting excited when I traded for this card. He looks like he's trotting around the bases before a spring training game, watching a home run. Note Davis' build. In the years before HGH and steroids were rampant in baseball, a build like this would get you 30+ home runs and 50+ steals.

The player: Eric Davis was one my favorite non-Cubs players growing up. He could do it all: catch, throw, hit for power, hit for average, steal bases. The turf so prevelant in the NL in that era really destroyed his body, limiting what should have been a hall-of-fame type career. The year shown on this card shows him just starting his career when the league was his oyster and he was bouncing between AAA Denver and the Reds. The following year he became the Reds regular  centerfielder and stole 80 bases, hit 27 homers, and scored 97 runs. He won gold gloves from 1987-1989 and was an all star in 1987 and 1989. He joined the 30-30 club (30+ HRs, 30+ steals) in 1987 and he hit for the cycle in 1989.

Despite being injury prone, Davis ended up playing 17 years in the majors, although his playing wasn't consistently good after 1990.  He did win the Comeback Player of the Year award in 1996 when he hit 26 HRs and drove in 83 runs for the Reds after being out for the year before because of various injuries. Eric Davis both lacerated his kidney while diving for a ball in the 1990 World Series (a play I vividly remember watching on TV and being horrified by) and was diagnosed with colon cancer during the 1997 season. He currently works in the Reds front office. 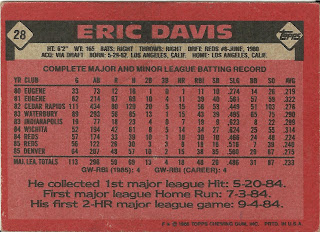 Rear guard: Eric Davis' first home run was off of the Phillies' veteran pitcher Jerry Koosman and drove in Reds pitcher Charlie Puleo. And boy, the back of this card shows how miscut it is. The first severely miscut card in the set.
Posted by Jets Break Jaws at 9:27 PM

Davis and Strawberry, old friends who were supposed to return the Dodgers to glory in 1992...instead the team lost a record 99 games and by 1994 both were gone, with careers in doubt.

Neither returned to superstar status but did at least enjoy productive seasons (when healthy) to close out the 1990's.

I recall Davis' injury, too. Ouch.

I also recall his final trip to Riverfront Stadium as a 2001 Giant. The crowd all but BEGGED Dusty Baker to insert Davis as a PH late in the game, but with the game in doubt and SF in contention, he passed—much to the consternation of Reds' fans. Wonder if it ever came up during Bake's managerial tenure in Cincy.

Also note the irony that in his return to MLB after 1.5 years off Davis ended up playing for Ray Knight in 1996—the same Ray Knight he infamously tussled with, to euphemize, a decade earlier.