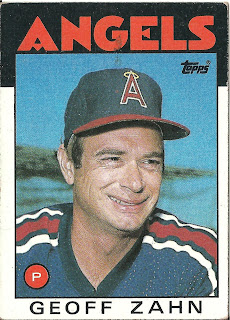 Card thoughts: This is one beat up card. And Zahn has one of the worst smiles I've ever seen, more like a leer. And lest you think this is an accident, like the photographer caught him in mid-smile, his 1984 card shows the same disturbing expression.

The player: Zahn didn't make it to majors until he was 27 and bounced about a bit until he found success. If you want to know the reason why the Cubs floundered in the 70s despite having some of the games brightest young stars, Zahn is part of the answer. In one their worst trades in the 70s (among many), the Cubs traded Burt Hooton early in the '75 season to the Dodgers for Zahn and Eddie Solomon. Hooton would win 18 games for the Dodgers the rest of that season and go on to be a mainstay in the Dodgers rotation for the next decade and Zahn would be released after winning two games for the Cubs. Of course, he would hook up with the Twins the next year and start a streak of having at least 10 wins a year until 1982.

Zahn was still a .500 pitcher who ate up a lot of innings (he led the league in runs given up in 1980 and 1981) when he had his greatest season in 1982 with the Angels. He won 18 games and helped the Angels reach the playoffs for the first time in franchise history. Unfortunately, his success did not continue in the ALDS as he lost his only start, giving up 3 runs in 3 2/3 innings. He would have another good year in 1984, tying for the league lead with 5 shutouts while winning 13 games. But that was about it for Zahn. He only pitched in 7 games in the season shown on this card, before blowing out his shoulder and never pitching again.

Zahn is now a Christian motivational speaker. His Website is confusing amalgam of jock aphorisms and can- do-spirit. At least he's learned how to smile in his pictures. 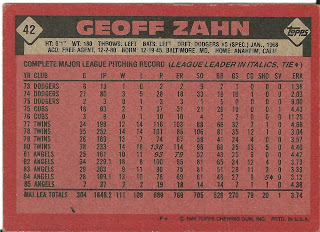 Rear guard: Just at a glance, you can see how before 1977 Zahn didn't pitch much and then started getting consistent starts once he made it the American League.
Posted by Jets Break Jaws at 8:25 PM