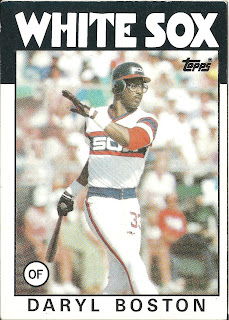 Card thoughts: I know Mr. Boston is a handsomer man than this. But when you combine the awful mid-80s SOX uniform with his comically oversized glasses, he kind of looks like Mr. Potatohead. The awkward follow through doesn't help either.

The player: Boston was drafted in the first round by the White Sox, but he spent his career with the team as a fourth outfielder. Boston consistently played in about 100 games a year, got around 250 at bats, and had home run and stolen base totals in the high teens. Unlike many fourth outfielders, he was in there for his bat rather than his glove. In 1988, despite only playing 85 games in the outfield, Boston made 10 errors, good for fifth in the American League.

Boston had the best year of his career after the Sox released him in 1990. He hooked up with the Mets, and became their everyday centerfielder, hitting 12 home runs, driving in 45, and hitting a career high .273. He even improved his defense, having the fifth best fielding percentage at his position. But it was back to the bench for the rest of Boston's career, which took him to the Rockies for their inaugural season, and finally the Yankees in 1994. He was never once traded in his career.

Boston is currently the minor league outfield coordinator for the White Sox. 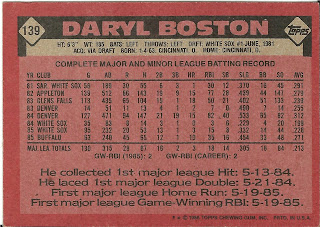 I always thought it was a shame that he never played for the Red Sox. How cool would it have been to see a player with his name on the front and back of his uniform?!