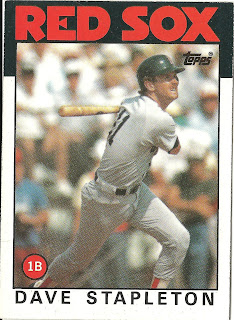 Card thoughts: Stapleton played second base this season. He was formerly the starting first baseman for the Red Sox.

The player: Stapleton is most famous for what he didn't do. He wasn't called on by manager John McNamara to defensively replace Bill Buckner late in Game 6 of the 1986 World Series, despite that being the only reason he was on the roster. The ball went through Buckner's legs and the rest is history.

Stapleton had some good credentials when he came up with the Red Sox in 1980. A high ball hitter who was good at situational hitting, he had won the International League MVP award the year before. Stapleton led the league in runs, hits, and doubles while hitting .306. He was called up to take over as the second baseman to replace an injured Jerry Remy, and he hit .321 with 45 runs batted in. Stapleton finished second to the even more forgettable Joe Charboneau in the Rookie of the Year voting. Despite his fine rookie season, Stapleton to was relegated to a utility role the next season, as his average began dropping; it would drop every year until he retired. With the departure of #85 Tony Perez, Stapleton was named the Red Sox starting first baseman. A great defender at this position, with especially good range, Stapleton hit .264 with 14 home runs and 65 RBIs. His numbers were similar the following season, though of course his average dropped again.

This production wasn't enough for the Red Sox, so they got Bill Buckner from the Cubs. Stapleton was now relegated to a mere 30 or so games a year as a defensive replacement for Buckner and other infielders, down from the 150 or so games he played as a starter. The last year he played was in 1986, when he appeared in 39 games, but with only 42 at bats. His last batting average was a lowly .121. 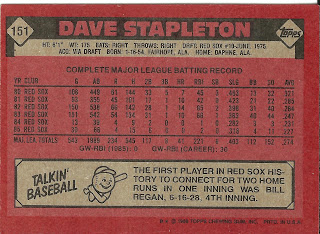 Rear guard: Bill Regan was the Red Sox regular second baseman from 1926 to 1930. 1928 was his best year, but he wasn't much of a power hitter; his high was 7 that season, and he hit only 18 in his career. His home runs came off White Sox pitcher Sarge Connally. He added a double and had a single for a 4 for 5 day, with 3 RBIs.
Posted by Jets Break Jaws at 7:22 PM