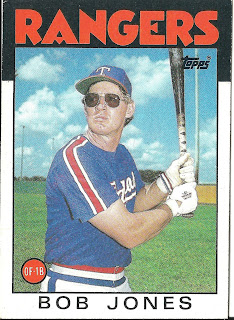 Card thoughts: Like #114 Mike Brown, Jones is sporting prescription sunglasses. This is a look you just don't see any more. Oh, probably because you look like a member of the Baseball Furies. Also, although Jones' first card was in 1977, he would only have three more cards in 1984, 1985, and 1986.

The player: Jones played nine seasons in the big leagues, but they weren't consecutive. He played from 1974-1977, then again in 1981, and finally from 1983-1986. His playing career was interrupted before he got to the majors, however. He was drafted by the military in 1969 and went to Vietnam for two years, which resulted in an injury that made him deaf in one ear. Jones didn't let this disability stop him, but the military service meant that it wasn't until seven years after he was drafted by the Senators (now Rangers) that he made the majors. Despite regularly hitting for power and average in the Pacific Coast League throughout the 70s, the only season where he played more than a handful of games in the majors was 1977, where he played in 78 games for the Angels, but only managed a .211 average for the Angels. Feeling blocked by the Angels, Jones was an early American player to play in Japan, playing 2 years for the Chunichi Dragons.

After returning to America, Jones resigned with his original organization . . . and continued to be stuck in the Pacific Coast League. Finally, Jones was brought back up to the majors for more than a cup of coffee at age 33, where he was mainly used as a backup of outfielder and pinch hitter. He hit .222, .259, .224, and .095 from 1983-1986 in that role before retiring.

After retirement, Jones has become the winningest manager in Rangers history---in the minors. He's amassed over 1,500 wins, and except for three years as Rangers coach, he's managed since 1988 in the system. 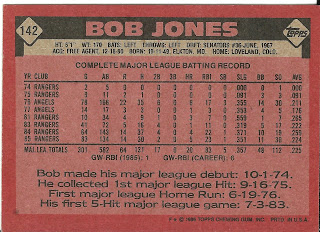 Rear guard: Jones looks like a young player, until you realize he had been drafted 18 years before this card was printed, and by a team that no longer existed in any kid's memory. Topps has the wrong date again, as Jones did not play September 16, 1975. His first home run, however, was off of Red Sox pitcher Rick Wise. It was a two run shot that drove in Bruce Bochte.
Posted by Jets Break Jaws at 5:33 PM