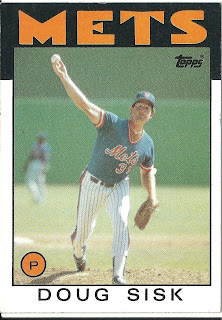 Card thoughts: Nice batter's POV shot of Sisk. But a flaw in the card printing makes it look like another baseball is emerging from his left elbow.

The player: Sisk was the Mets' top reliever for a season and half. Then, midway through the 1984 season he got injured, and was never the same. Featuring a sharp biting sinker, pre-injury Sisk had ERAs of 2.24 and 2.09 while saving 11 and 15 games, respectively, in 1983 and 1984. After coming back for the season shown on this card, Sisk lost confidence in himself and consequently so did his manager. From the Mets' closer to a mop up man, Davey Johnson would rarely use him anymore with the game on the line, as he allowed 1.72 baserunners per nine innings. Always prone to the walk, Sisk began giving up more hits and finished with a career high 5.30 ERA. In the Mets 1986 run to the World Series, Sisk was a forgotten man on the field, booed mercilessly by Mets fans suddenly not accepting any failure on a near perfect team. In the playoffs, he managed to only pitch 1 2/3 innings. Off the field, Sisk made more of an impression as part of the "Scum Bunch" along with Jesse Orosco and Danny Heep who ruled the back of the Mets charter flights--and prided themselves on being the most crass and wasted players on a team full of hard drinkers.

Sisk never exited the Mets' doghouse and he was traded to the Orioles after the 1987 season for Blaine Beatty. Despite pitching 94 1/3 innings (the most since 1983) and sporting a 3.72 ERA, he was still walking twice as many batters as he struck out. The Orioles wouldn't trust him either and released him. After short stints for the Braves in 1990 and 1991, he retired. He currently works as a recreation coordinator. 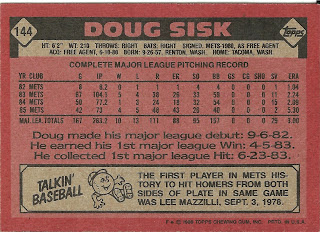 Rear guard: It's not often Topps will cite a pitcher's first hit. Sisk pitched 5 innings of relief that day, and his hit was off of #33 Jeff Lahti. He would actually have 3 hits that season in 6 at bats, ending with a neat .500 batting average.

Lee Mazzilli was about the only respectable hitter the Mets had in the late 70s. His home runs were both solo shots and came in the first inning (off Tommy John, of the Dodgers) and the 7th inning (off Charlie Hough). Here's his card from that season.
Posted by Jets Break Jaws at 8:35 PM