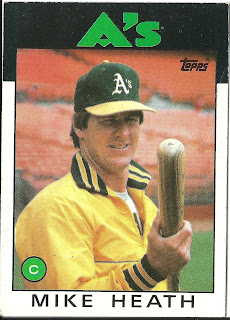 Card thoughts: "See this bat? It's going upside your head if you take another picture of me in this ugly yellow windbreaker"

The player: Heath started his pro career as a shortstop, but was a catcher when he came up with the Yankees in 1978. After being traded to the A's (from the Rangers) for John Henry Johnson, Heath quickly became known as one of the better fielding catchers in the American League. He was quick on his feet behind the plate, called a great game, and threw out better than 40% of would be base stealers. As a young man, his temper was sometimes an issue. Despite being a great catcher, Heath was used frequently in the outfield, once his bat came around, to keep him in the lineup. Heath started hitting for power in 1984 and the season shown on this card, hitting 13 home runs each year. His average remained in the .240s, however.

In a surprising move, Heath was traded to the Cardinals for recent 21 game winner Joaquin Andujar after the 1985 season. He only lasted 65 games with the Cardinals before being sent to the Tigers, where he would spend the next 5 season. He was a back up catcher/outfielder the first three years, (including 1987 when he played every position but pitcher), until Matt Nokes flamed out. Heath then  took over as the regular catcher for the 1989 and 1990 seasons, hitting 10 homers the former year and averaging .263, his highest career average as a regular. Heath's final season came with the Braves in 1991. 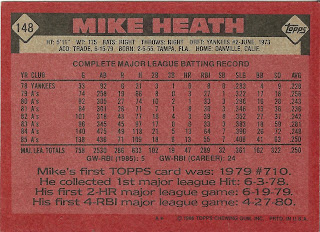 Rear guard: Here's Heath's 1979 rookie card. Topps was cheap that year, and didn't want to spring for color photos on the prospect cards. Heath was traded with the player on his right to the Rangers organization for Dave Righetti. The player on his left, Brian Doyle, hit .161 in parts of four seasons with the Yankees and A's. He played with Heath on the 1981 A's.

Heath's 2 home runs came in his first game with the A's. He replaced starting catcher Jeff Newman after he was injured in the first inning. They came off Royals pitchers Al Hrabosky and Dennis Leonard.
Posted by Jets Break Jaws at 9:23 PM