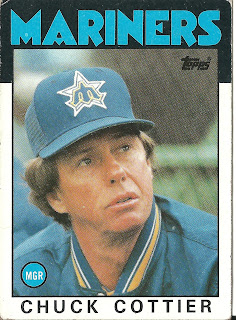 Card thoughts: Cottier looks like a off-duty steel worker, ponying up to to his local dive bar. The second manager card of this set where the manager seems caught in mid-lecture.

The manager:  As a player, Cottier was a poor hitting, good fielding, middle infielder who played from 1959-1969 on the Braves, Tigers, Senators, and Angels. After a year off, he began his managing career in the Pirates and Angels minor league systems. Cottier finally made it to the majors (again) as a coach for the Mets from 1979 to 1981. He moved on to coach the Mariners, and then took over for Del Crandall after he was fired with 27 games left in the 1984 season. He led the team to 15-12 record as an interim manager, which was good enough to be hired full-time in 1985, the season shown on this card. In his only full season as a manager, he led a Mariners team with a good lineup but terrible pitching staff to a 6th place finish and a 74-88 record. In one memorable moment that season, Cottier became enraged at a check swing strike call, pushed #70 Dave Winfield off of first base, and hurled the bag into the outfield. He later threw an equipment bag and a bunch of bats onto the field.

Cottier was fired the following season after the Mariners got off to a slow 9-19 start. He later went on to coach for several seasons for the Cubs (which I kind of remember), and for the Orioles (1995) and Phillies (1997-2000). 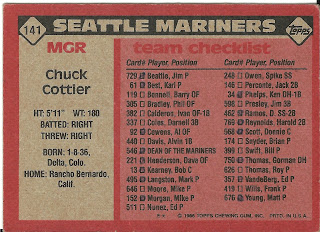 Rear guard: On the hitting side, it is a shame they picked Darnell Coles rather than Danny Tartabull to represent a late season call-up . The omission on the pitching side is pitcher Salome Barojas, who pitched more innings than Mike Morgan, #61 Karl Best, and Brian Snyder.
Posted by Jets Break Jaws at 3:09 PM